Jemele Hill Failed Badly in '17, Earning her NABJ Journo of the Year Award 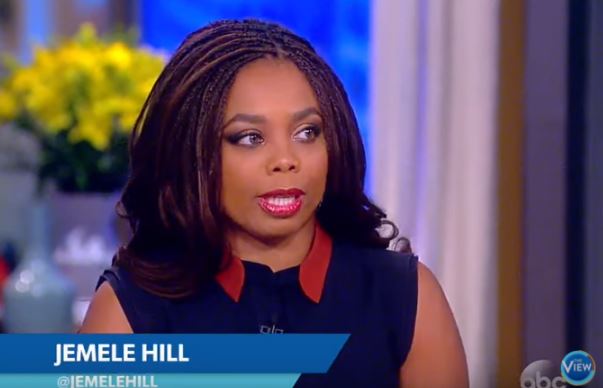 A year of failure, suspension and demotion is all it takes to win a journalist of the year award—if you're Jemele Hill and you very publicly called the Republican president of the United States a "white supremacist." For this and other less-than-stellar "accomplishments" in 2017, Hill is the winner of the Journalist of the Year award in 2018 for the National Association of Black Journalists.

Hill is known for setting the bar low, engaging in three disasters in 2017. The first was her September "white supremacist" tweet that caused a national uproar and put her on thin ice with ESPN.

Hill kept digging a bigger hole with her subsequent tweets:

Secondly, Hill was soon-after suspended two weeks for urging a sponsor boycott of the Dallas Cowboys, some of whom also advertise on ESPN. Thirdly, Hill and her former co-anchor Michael Smith are both gone from ESPN's unpopular SportsCenter 6 program, a smoldering ruin after a mere one-year run. She now writes for ESPN's black race-baiting blog, The Undefeated. Some say she got kicked downstairs and didn't go on her own accord.

But, hey, if you play the race card and trash a sitting Republican president, you're a superstar to the liberals at NABJ. The award "recognizes a black journalist who has amassed a distinguished body of work with extraordinary depth, scope and significance to the people of the African Diaspora."

NABJ bragged up Hill's failures, gushing that she "uses her platform to address national, social and cultural issues, in addition to sports. Hill nearly broke the internet last year when she criticized President Donald Trump. She also, taking up the NABJ spirit of advocacy, addressed athletes’ rights to take a knee to protest police brutality. She did all this while co-anchoring a groundbreaking rebrand of ESPN’s marquee show SportsCenter, or SC6, along with fellow NABJ member Michael Smith."

In the NABJ news release, the top two officials at NABJ are raving about Hill. President Sarah Glover gives Hill credit not for wisdom or writing and reporting prowess, but for perseverance:

“Jemele Hill is a gem. She exhibits strength, grace, and doggedness. NABJ appreciates the courage and steadfastness Jemele has demonstrated as a journalist and commentator speaking truth to power.”

Marlon A. Walker, NABJ’s vice president of print, may have inspired journalists to lower their standards, saying:

“Jemele is the epitome of what a black journalist should be."

Hill called getting demoted from a national TV program to a blog, “the biggest accomplishment of my career.” And:

“It would be a serious understatement to call this recognition from NABJ special. This organization has been a second family for me, both personally and professionally. I am humbled to be honored by an organization whose values not only match my own journalistically but has tirelessly dedicated itself to developing and nurturing journalists like me."

Hill will be honored in her hometown of Detroit at the NABJ Salute to Excellence Awards Aug. 4. Among the previous winners of this award were Lester Holt and Bryant Gumbel.