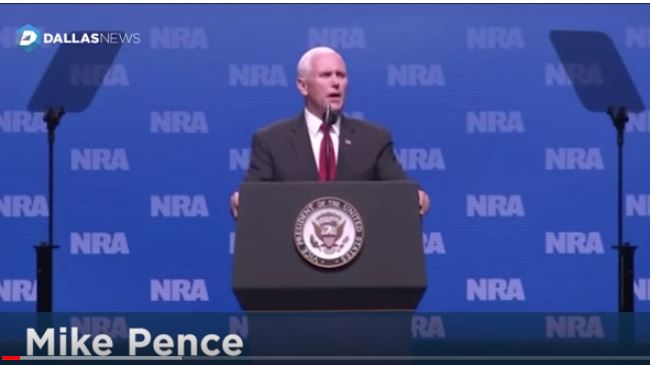 On the occasion of the annual NRA convention, in Dallas, New York Daily News sports writer Mike Lupica charges that President Donald Trump and his NRA friends are now living in fear of the high school students advocating against the Second Amendment. Without once mentioning mental health as a major cause in mass shootings, Lupica attacked Trump, Vice-president Mike Pence and congregants of the "Church of the Gun" who gathered in "Crazytown" to support gun rights.

Lupica finds it ludicrous that less than three months after a gunman killed 14 students and three adults at Marjory Stoneman Douglas High School, in Parkland, Fla., Second Amendment supporters still think the only way to make people safe "in the most violent and dangerous gun nation in modern history is even more guns":

"So they celebrated a man named Stephen Willeford at the NRA convention. He was the man who chased down Devin Kelley, the shooter at the First Baptist Church of Sutherland Springs, Texas, six months ago, after Kelley's AR-15 had shot 26 people dead at that church.

"He had an AR-15 and so did I," Willeford told the convention crowd, as if the solution to everything would simply be more easy killing guns like that in Baptist churches and Florida high schools and Connecticut elementary schools. Maybe the only thing we needed when Stephen Paddock opened fire on a music festival on the Las Vegas Strip from his 32nd floor window at the Mandalay Bay hotel and killed 58 people and wounded 850 more was a room service waiter with an AR-15 of his own.

Lupica fiercely ridiculed VP Pence (in photo above) calling him "an opening act for Joe Arpaio, who as a sheriff in Arizona once out-goobered the sheriff played by Jackie Gleason in 'Smokey and the Bandit.'" Pence told the convention, "Firearms in the hands of law-abiding citizens (make) our communities more safe, not less." That just floored Lupica, who wrote: "He said this, straight-faced, in a country where there have been 152 mass shootings (the definition of a mass shooting is four or more people killed, not including the shooter) in the last nine years."

Firing his contempt for people opposed to gun-free zones out of both barrels, Lupica continued his verbal assault:

And the solution offered at the Church of the American Gun is more guns, in a hall filled with people the President called patriots, all those who mock the notion of gun-free zones, and think you can prevent all future Parklands by arming more reading specialists and phys ed teachers.

They want nothing to change with guns. They continue to get enough slow learners to believe that if you take AR-15s out of the hands of civilians and strengthen background checks, if you simply do that, it is the first step towards taking all guns away, and folding the Second Amendment into a party hat. It means they weren't really holding that convention in Dallas. They held it in Crazytown.

Lupica believes that high school students have "congregants" on the run because Parkland students Emma Gonzalez and David Hogg, both "fiercely eloquent and passionate victims of Marjory Stoneman Douglas, have changed the game forever and they know it. Emma Gonzalez and David Hogg and the rest of them are coming after them, armed only with the message that things not only should change with gun laws, but must change."

Business isn't so great for the NRA right now, Lupica writes. Citing an unnamed poll that the NRA is now viewed unfavorably by a majority of Americans for the first time in two decades, he concludes, "So now these people aren't just afraid of bad guys with guns. They're afraid of a bunch of high school kids."

On Friday, the Daily News writer John Feinblatt also advocated for gun control. Feinblatt disclosed he is the president of a group advocating for more gun laws, Everytown for Gun Safety! Disclosure or no disclosure, Lupica's knee-jerk hatred for Second Amendment defenders drips from his piece, making it clear he works for the right tabloid.