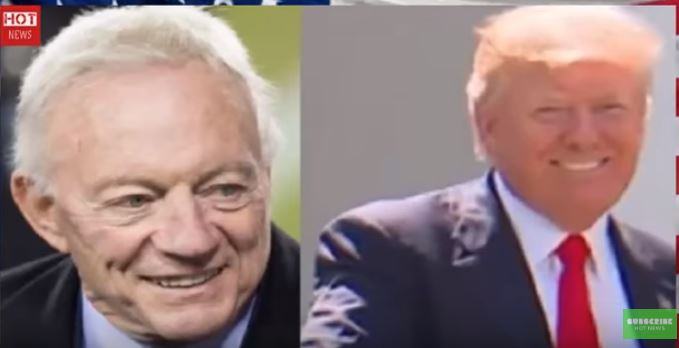 Colin Kaepernick's former teammate Eric Reid this week filed a collusion lawsuit against the NFL, and an anonymous source told Yahoo! Sports that President Trump is the actual target of this new litigation.

Reid played for the San Francisco 49ers for the past five seasons, and in 2016 he kneeled in protest alongside Kaepernick. Reid is now a free agent, but he's attracted little interest from other teams. This week the safety filed a lawsuit against the NFL claiming the league colluded against him because of his anthem protests, just as Kaepernick did last fall.

Charles Robinson has been reporting on the Kaepernick and Reid stories for Yahoo! Sports. He's citing the proverbial unnamed source in a story claiming Reid's lawsuit is aimed not at the NFL, but at the president:

"When Eric Reid filed a grievance against the NFL this week, it highlighted a string of legal breadcrumbs left for months in Colin Kaepernick’s collusion case brought against the league. And now more than ever, those breadcrumbs appear to be leading to one person: President Donald Trump.

"A source who has viewed Reid’s confidential collusion filing against the NFL told Yahoo Sports that Trump is the crystal-clear target in the complaint."

Robinson's mystery source alleges Trump is the target of Reid's suit because he played a direct role in "aligning NFL owners against players who had chosen to kneel as a form of silent protest, an act designed by the players to raise social awareness and promote racial equality, among other pursuits."

Additionally, Robinson's source says Reid’s complaint is "anchored almost entirely to allegations of direct, but apparently still undefined, communications between Trump and NFL owners, which caused owners to take adverse action against Reid and other players."

One of those players is allegedly Kaepernick, but he's not the only one, according to Robinson's sports version of "Deep Throat."

The anonymous source told Robinson that President Trump had public and private communications with NFL owners that included a litany of statements the president made about kneeling players in speeches, interviews and on his Twitter account. Private communications between Trump and Dallas Cowboys owner Jerry Jones (left in photo above) and other owners could also supposedly demonstrate collusion.

The source claiming to have seen the lawsuit indicated it rehashes some of Kaepernick's collusion lawsuit, with one key difference that could make Reid’s case "more revealing." It follows months of discovery and depositions by the attorneys representing both free agents. They now have a lot of private information that wasn’t available at the time Kaepernick filed his complaint in October.

Robinson writes: "Reid’s lawyers may feel they already have the evidence of collusion they need because it has been revealed during the course of Kaepernick’s discovery process."

Both lawsuits take aim at NFL Commissioner Roger Goodell, other NFL executives and all 32 team owners. "But it apparently paints Trump as the driving force behind the depths of the league’s motivation to keep both Kaepernick and Reid out of the league," Robinson says of Reid's suit. It's the key distinction between the two lawsuits. "And it suggests that during the process of discovery, the attorneys for Kaepernick and Reid have cultivated evidence putting Trump at center stage."

Depositions of two team owners focused on the president. Jones admitted to having conversations with the president about kneeling players, and Miami Dolphins owner Stephen Ross said he supported the protests, then turned against them after Trump portrayed player protests as anti-military (something many, many football fans alleged from the start of Kaepernick's protest). A recent New York Times story on the leaked tape of a meeting between owners and protesting players last November included several instances of owners expressing concerns about Trump's opposition to the protests.

Robinson's conclusion again zeroes in on the president as highly influential in collusion against Reid and Kaepernick:

"Viewed in the wider scope, the points of information are leading straight to one place. From the direction of the depositions, to the surreptitiously recorded meeting between players and owners, to a pair of collusion cases that apparently now share a unifying theme.

"Seven months ago, Trump was a strong figure in alleged NFL collusion. Today, he’s the center of it."

Robinson's piece personifies the overwhelming bias of sports media against President Trump. Nothing would please them more than for Reid and Kaepernick to win their respective collusion lawsuits and to have the blame for the NFL's loss laid at President Trump's feet.