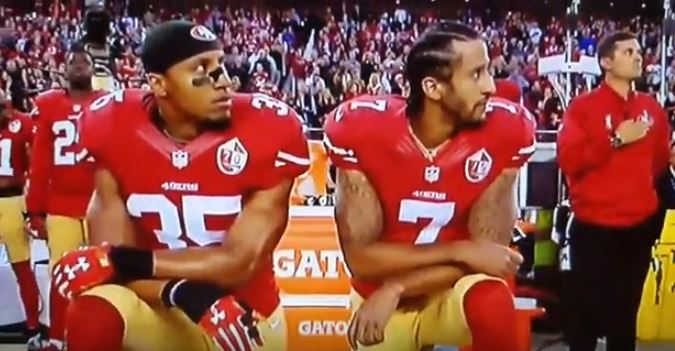 Free agent football player Eric Reid, who kneeled with Colin Kaepernick in 2016 and again in 2017 in Kaepernick's absence, is now also suing the NFL for collusion. With Reid unable to find a new team in this offseason, news of his lawsuit prompted a Bay Area sports writer to claim the NFL is portraying protesters as "convicted felons."

"The writing is on the wall," says Gary Peterson, a sports writer for the Bay Area News Group. His post, "Failing football, Kaepernick and Reid best served by exposing big, bad NFL", appeared in today's San Jose Mercury News. "The protests made the two undesirable. The grievance has made them radioactive ... ."

Neither player is being totally ignored. The Cincinnati Bengals actually met with Reid and asked if he planned to continue kneeling as he did for the past two seasons. 49ers' general manager John Lynch said his team might re-sign Reid "if there was 'a fit' on the roster." The Seattle Seahawks twice rang Kaepernick's phone. But neither social justice warrior has been offered a contract, which has the incensed Peterson taking their side of the controversy:

"Both men (kneeling in photo, Reid on the left) have expressed a desire to continue their NFL careers. To date, neither has had little more than a sniff. The two teams expressing interest (the Seattle Seahawks in Kaepernick; the Cincinnati Bengals in Reid) seemed more interested in whether or not they would be continuing their silent protests than their football skills."

Peterson writes, "Their cause is as important to them as their careers. Failing football, which has failed them, what’s better for the cause than Kaepernick and Reid earnestly stumping for a job and the big, bad, authoritarian NFL refusing to grant them their wish.

"The longer this drama twists in the wind, the worse the league looks."

Additionally, Peterson says NFL owners are "far more concerned" how President Donald Trump would react to ongoing player protests than they are "to the plight of Kaepernick, who was/is clearly being blackballed."

Peterson says he can almost see Buffalo Bills' owner Terry Pegula wringing his hands and saying, “All Donald needs to do is to start (agitating) again. We need some kind of immediate plan because of what’s going on in society.”

Peterson sarcastically exaggerates the league's view of protesters, concluding that "Maybe the owners will find some common ground that doesn’t portray NFL players as convicted felons. Maybe Lynch will be the guy to put football over ideology. The view from here: We have met the outcome, and the outcome is us."

Truth be told, for two years ideology has won over good business sense in the NFL, which keeps staring at the hole shot in its collective foot, but doesn't do anything about it. More potential losses in business and public approval are just a few months away. And many in the media are trying to shame the NFL into inflicting greater damage on its shrinking fan base by rewarding notorious protesters.