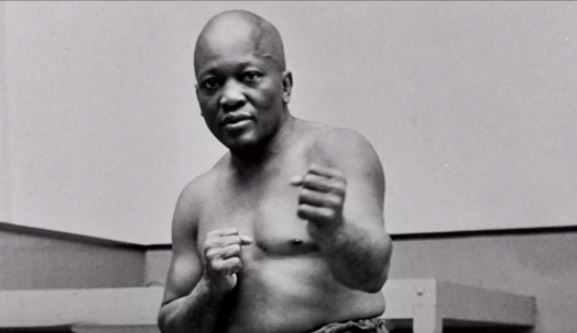 The Nation's sports editor Dave Zirin is livid that the man who occupies the White House, courtesy of the slave-holders who devised the electoral college, is getting the credit for pardoning Jack Johnson. The African-American Johnson was an early 20th century boxing champion who also served prison time for a criminal charge.

Johnson (shown in photograph) was the first African-American world heavyweight boxing champion, from 1908-1915, the era of Jim Crow. He had dated and married white women, and in 1912, he was arrested for violating the Mann Act forbidding a person from transporting a woman across state lines for "immoral purposes." He fled the country, but later served jail time for what was considered a racially motivated arrest.

President Obama never saw fit to pardon Johnson. But after receiving a phone call from Sylvester Stallone on the topic of Johnson, Trump tweeted this on Saturday:

“Sylvester Stallone called me with the story of heavyweight boxing champion Jack Johnson. His trials and tribulations were great, his life complex and controversial. Others have looked at this over the years, most thought it would be done, but yes, I am considering a Full Pardon!”

Zirin is madder than a wet hen about a president he detests righting a racist wrong. The pending pardon undermines his hard-line position that the current president is a horrible racist:

"Donald Trump is a racist and a bigot. He has a fifty-year history that demonstrates this time and time again. I could write—as so many have—yet another scroll-length listing of the man’s racial perversions, from housing discrimination to his promotion of the racist birther theory to his equivocation on condemning the Klan in Charlottesville to his reference just this week to 'breeding' when discussing immigration."

"We are a country that just used the political tool of 18th and 19th century slaveholders—the Electoral College—to elect a white-supremacy sympathizer even though he received three million fewer votes than his opponent. This is a sick system, and it lacks the moral authority to pardon Jack Johnson for any reason other than its own public relations. It’s not for us to forgive Jack Johnson. The opposite is the case."

[Note to Zirin -- and this cannot be said too often: there are dozens of other countries out there that may be able to live up to your high standards. Scandinavia is a nice region. Getting more diverse all the time. Give it a try, Dave.]

The thought of Trump pardoning Johnson is further "repellent" to Zirin because Johnson did nothing wrong. And because "Donald Trump not only lacks the credibility to either pardon or exonerate Jack Johnson—he does not even have the moral standing to have Jack Johnson’s name in his mouth."

Zirin says he can understand why Johnson’s relatives want his name cleared. "It also should be more than understandable why Donald Trump is not the person to do it. Donald Trump would have despised Jack Johnson, and the feeling would have been very mutual."

Grand Valley State University professor Louis Moore, who authored the book "‘I Fight for a Living: Boxing and the Battle for Black Manhood, 1880-1915," shares Zirin's great pain about Trump, telling him:

"100 plus years ago, Trump would have hated Jack Johnson. He’d hate him for his independence. His very existence challenged what white men like Trump believed. Trump would be just like those other politicians, scheming ways to go after Johnson. In Johnson’s day, the same white politicians that tried to stop him from fighting, also turned a blind eye to lynchings. They are the same politicians, like Trump, who demanded that black men die, for supposed crimes, even if they were innocent."

Zirin is a hardcore leftist, but to further belittle President Trump, he's willing to give another Republican credit for championing Johnson's cause. It's U.S. Senator John McCain, who's previously talked up a pardon for the late boxing champion. "Trump giving the credit to Stallone instead of McCain as McCain battles brain cancer is just more evidence, as if needed, of Trump’s cruel pettiness," Zirin writes.