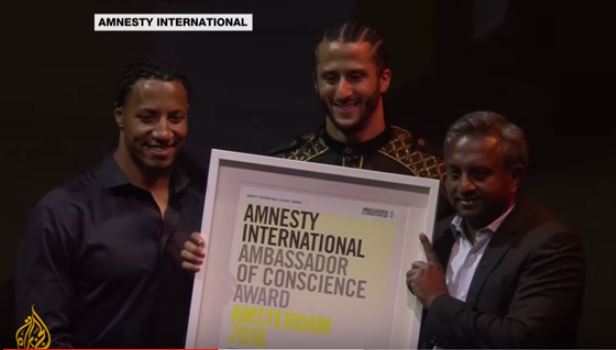 Running off his mouth about "lawful lynching" in the U.S., Colin Kaepernick (center in photo) may have hammered several more nails into the "coffin" of his NFL career. But in accepting Amnesty International's Ambassador of Conscience Award—it's highest award—in Amsterdam last night, he thrilled his adoring media base.

Already on paper-thin ice with turned-off NFL owners, Kaepernick's acceptance speech remarks could not have done more to alienate himself from ticket-buying football fans or to lessen the likelihood of continuing his NFL career:

"Racialized oppression and dehumanization is woven into the very fabric of our nation. The effects of which can be seen in the lawful lynching of black and brown people by the police, and the mass incarceration of black and brown lives in the prison industrial complex.

"In truth, this is an award that I share with all of the countless people throughout the world combating the human rights violations of police officers, and their uses of oppressive and excessive force.".

Sean Gregory of TIME magazine loved it. So did Aljazeera and Panama Jackson, the senior editor of the Very Smart Brothas blog, writing on The Root. Kaepernick's highly charged words attracted wide media coverage, with little if any visible criticism.

Kaepernick wasn't through yet with his inflammatory remarks though:

“How can you stand for the national anthem of a nation that preaches and propagates, ‘freedom and justice for all,’ that is so unjust to so many of the people living there?

“To quote Malcolm X, when he said that he, ‘will join in with anyone—I don’t care what color you are—as long as you want to change this miserable condition that exists on this earth,’ I am here to join with you all in this battle against police violence."

In a statement issued by Amnesty International, the Black Lives Matter activist said he's sharing the award with "all of the countless people throughout the world combating the human rights violations of police officers, and their uses of oppressive and excessive force. I am here to join with you all in this battle against police violence."

“While taking a knee is a physical display that challenges the merits of who is excluded from the notion of freedom, liberty, and justice for all, the protest is also rooted in a convergence of my moralistic beliefs, and my love for the people."

The Ambassador of Conscience Award is given to “people who have used their talents to inspire others to fight for human rights. The award also aims to create debate, encourage public action and raise awareness of human rights issues.” Previous recipients include Nelson Mandela, Alicia Keys, the movement for rights for indigenous people in Canada, Joan Baez and U2." 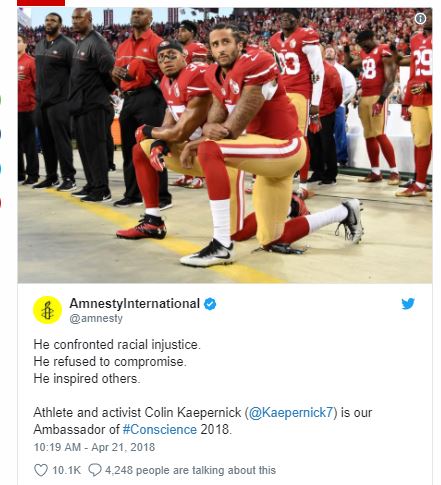 Salil Shetty, Amnesty International's secretary-general, said, "The Ambassador of Conscience award celebrates the spirit of activism and exceptional courage, as embodied by Colin Kaepernick. He is an athlete who is now widely recognized for his activism because of his refusal to ignore or accept racial discrimination. ... Colin Kaepernick's commitment is all the more remarkable because of the alarming levels of vitriol it has attracted from those in power."

Jackson saw no wrong with Kaepernick insulting Americans and police officers on foreign soil, writing: "Kaepernick called it like we all see it, referring to the police killings of black and brown people as 'lawful lynchings.' Kaepernick is both deserving and in pretty good company."

TIME's Gregory raved, "Colin Kaepernick may not have a job on the football field, but much of the world is still cheering for him."

Aljazeera called Kaepernick a "protest icon" and a man of "immense courage."

"Regardless of who agrees or disagrees with Kaepernick’s cause or the manner in which he has chosen to advance it, none can credibly dispute the fact that he has lost his employment in the NFL because of it. Some continue to justify the NFL’s shunning of Kaepernick and Reid by explaining that players who choose to protest during the national anthem are 'bad for business' (and by attacking those who speak out in support of them) without recognizing the reality that the NFL gave them the right to protest during the national anthem in 2009 ... ."