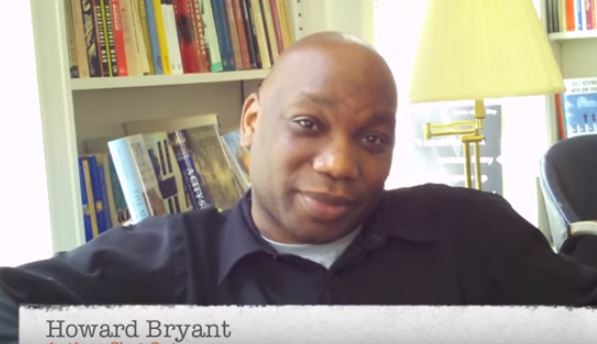 Major League Baseball just observed the 71st anniversary of Jackie Robinson breaking the race barrier, but little has changed since 1947 when he endured appalling racism. ESPN's Howard Bryant (in photograph) claims that if Robinson was still alive today, "He would be facing the same sort of vitriol that Colin Kaepernick is facing today." Bryant made these and other pointed remarks about race on The Sporting Life with Jeremy Schaap radio program. Oh, and statistical analysis is racist.

It's not surprising that Bryant, an African-American and senior editor for ESPN The Magazine, said race relations haven't improved in the U.S. since the 1940s. It's good for business. He is the author of a racially charged book that will be released in early May.

In "The Heritage: Black Athletes, a Divided America, and the Politics of Patriotism" Bryant deals with the "radical politics" of Robinson, Muhammad Ali, Tommie Smith and John Carlos that is being reclaimed today by social justice warriors LeBron James, Colin Kaepernick and Carmelo Anthony.

During his interview with Schaap, Bryant mainly focused on race and baseball. Just under 8 percent of major leaguers last season were black, and Schaap asked Bryant if it's just a matter of personal choice. Bryant responded that it's a choice made by baseball and then switched the topic from black athletes playing baseball to the low numbers of black executives employed in professional sports:

"If you're talking about front offices it doesn't make a difference what sport it is. You're always going to be talking about the black body over the black brain. The black body produces. The black brain does not get a lot of opportunities in sports. Look at the number of black general managers in basketball -- 80-percent black league -- and how many GMs are there in basketball? Black executives in football? It's same thing."

It's not just the hiring of executives that makes sports racist either, according to Bryant. The increasing sophistication of the sport is ... yes, racist:

"I believe in baseball that analytics are the equivalent of racism because baseball has created a new barrier to entry. Now you have to have an Ivy League degree to get a GM job in baseball. Only two GMs in baseball right now are ex-players. ... If you're an African-American, being an ex-player is not gonna help you anymore because now you gotta be an Ivy leaguer. Eight percent of the Ivy Leaguers are African-Americans."

Finally coming around to the issue of how many blacks are choosing baseball over rival sports, Bryant complained that baseball is an expensive traveling sport that black families cannot afford. He said public baseball programs have disappeared and baseball scouting has been overhauled to the detriment of blacks.

"Baseball used to look for unfinished products out of high school and it wanted to develop talent in the minor leagues," Bryant said. "Now they want a finished product. Baseball prefers its players to be coming out of college, and if you're going to look for black players in college you're not going to find them. Only two percent of NCAA baseball players are black."