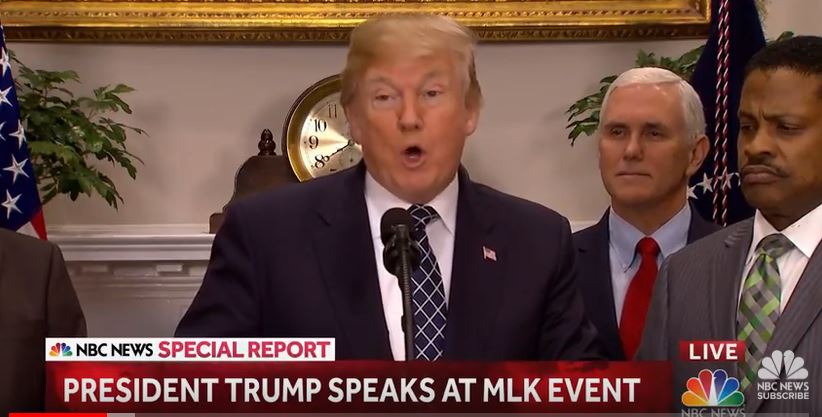 In vintage form, The Nation's ill-tempered sports editor Dave Zirin writes that President Donald Trump and VP Mike Pence (in photo above) had no business praising the late Dr. Martin Luther King on the 50th anniversary of the civil rights' icon's murder.

"There is a uniquely nauseating feeling that overcomes the senses when people bathe themselves in Dr. Martin Luther King Jr.’s legacy while standing for a set of principles in stark opposition to his life’s work. It’s like smelling an odor so powerful, your head jerks backward in shock.

"Yet it doesn’t make it any less repugnant when abject racists like Donald Trump and his lickspittle Mike Pence pay their respects in a way that makes you imagine them either laughing or clenching their teeth."

Here are the Trump and Pence tweets: 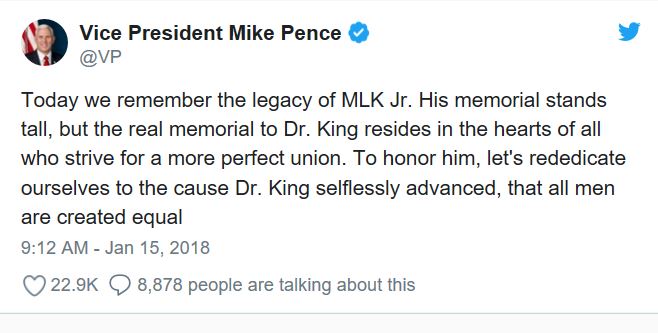 Zirin accused Trump of housing discrimination against African-Americans in 1968, the same year Dr. King was assassinated by James Earl Ray. "It’s enough to say that the very day this tweet was sent, Trump was also braying about sending troops to our southern border to stop a caravan of immigrants challenging the very inhumane acts of racism which King devoted his life to fighting."

"Immigrants" are people who legally enter the U.S.; the belligerent Hondurans intend to defy our law and cross our border illegally.

According to Zirin, Trump and Pence are also opposing athletes attempting to "walk in King's footsteps: Colin Kaepernick and other NFL players who took a knee during the national anthem in protest of racial inequality and police violence. What these players did was to live King’s legacy: It was nonviolent direct action aimed at making the white population confront the gap between the ideals of this country and the lived experience of black Americans."

The race-baiting diatribe continued with Zirin writing it's been difficult for athletes to have a "desperately needed debate about police violence" because of "the racist fury of Donald Trump," who denounced them in an Alabama speech and during the State of the Union speech. Zirin claims some NFL players hired private security guards after President Trump's "Twitter tantrums."

"It was ugly as sin," Zirin railed, "a redirecting of the focus of the protest away from police violence and toward a self-righteous aggression towards the players for having the temerity to speak out at all. That’s what Donald Trump does: He distracts and demonizes. Mike Pence then showed himself to be nothing but his hand puppet when he staged a walkout from an Indianapolis Colts game at the taxpayer’s expense to embarrass protesting players."

It is also the fault of the president that Kaepernick and his former teammate and co-protester Eric Reid are unsigned NFL free agents. Zirin would have us believe strong-willed owners who donated money to Trump are so lacking in spine that they're appeasing him by punishing these unsigned players. Trump basks in the glory of their inability to find work in the NFL, Zirin claims, adding:

"This is who they are. They should be honest about that. And part of being honest is getting Dr. King’s name out of their mouths. It is quite literally the least they could do."