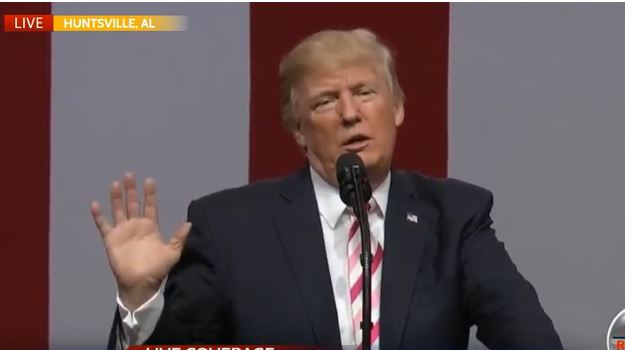 President Trump is most definitely not a cool, hip, basketball junkie like Barack Obama, who annually filled out his March Madness bracket on ESPN. With the help of a reader, a President Trump hater at the Deadspin sports blog picked an unauthorized Final Four field for their least favorite president. Complete with digs at Trump, of course.

The anti-Trump version of March Madness started with an email from a reader named Mark, who wrote:

"Let’s assume Trump fills out a public NCAA tourney bracket. I’d say it’s obvious that he’d have Indiana v. Duke in the final (regardless of whether Indiana is in or not), but who else would make his Final Four?"

Deadspin's Drew Magary took it from there, answering Mark's question about the rest of this phony Trump bracket:

"PENN! DID YOU KNOW TRUMP WENT TO WHARTON BECAUSE HE’S GOT THE BEST BRAIN THERE IS? VERY VERY LARGE BRAIN AND THAT’S BEEN WIDELY REPORTED. He’s picking Penn to win the whole thing, unless he’s not aware that Wharton is part of the University of Pennsylvania. That’s a distinct possibility. He also may be under the impression that Wharton is located in Trenton."

Magary wrote that Trump would get bored after filling out 10 percent of the bracket and make a midnight call to a celebrity supporter, Good Times star Jimmie Walker, instead. Magary said the brackets require too much work for the president:

"That’s why he didn’t full out a bracket for ESPN last year. It’s too much manual labor for him. His stubby little hand would cramp up. His writing would get progressively sloppier. Three weeks after the tourney was over, he’d finally round out his Final Four picks and include Jack Nicklaus, Papa John, Trump-brand body wash, and a chicken Caesar salad."

Magary added that if an aide on Trump's soon-to-be-fired list sat the president down and forced him to fill out the whole bracket, his wacky picks would including the following criteria:

2. Any state that voted for him

3. Any place that was nice to him.

With those self-serving guiding principles, Trump's Final Four would include Penn, Wichita State ("a program that’s financed by the Koch brothers"), Arizona (“Who here loves Sheriff Joe?! We all love Sheriff Joe, right?!”) and a three-way tie between Michigan, Ohio State and Florida State in the West. This would include key battleground states that Trump won, and Trump keeps a pocket map of all the states he won on his person at all times. (NOTE: Arizona is located in the liberal bastion of Tucson, which hates Arpaio. The former sheriff of Pima County, Clarence Dupnik, blamed the 2011 Cong. Gabby Giffords' shooting on talk radio and TV.)

"The best part is that there is no way on Earth that Trump would acknowledge a busted bracket," Magary writes. "The second Penn loses (and we should all pray for that), he’d just take the pot money and sue everyone else in the pool for libeling his picks."

Conveniently overlooked by the writer of this fantasy sports blog were these memorable reality headlines of the past: