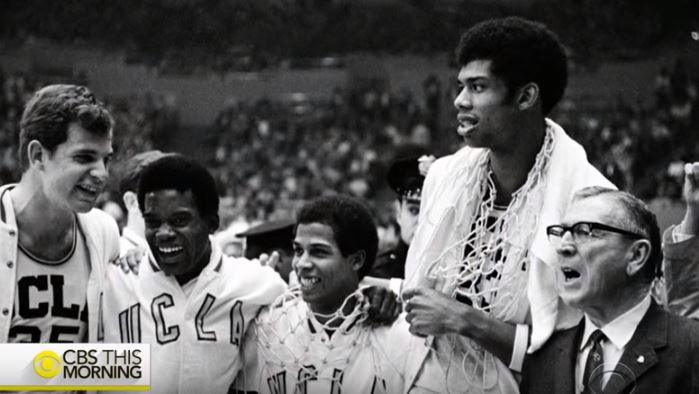 Kareem Abdul-Jabbar, worth an estimated $20 million, was exploited by UCLA and legendary Coach John Wooden on his way to wealth and fame in the NBA. That's one of the truth-stretching stories in Etan Thomas's new book on athletes and social justice activism. Want more? John Carlos and Trayvon Martin are heroes. These and other far-fetched claims flew right past The Undefeated senior writer Jerry Bembry in his softball-laden interview of Thomas.

A race-baiting grievance blog, The Undefeated was a must-stop for Thomas, a retired NBA player, on his book tour. His book, We Matter: Athletes and Activism, features interviews with a who's who of racial grievance mongers and family members of Martin, Eric Garner and others who died in clashes with police officers.

"Right now so many athletes are using their positions and platforms to speak out on different things and different topics that are dear to their hearts, and doing so in a way that’s unprecedented since maybe the 1960s," Thomas told Bembry in the interview.

Liberals are beating the drum again for payola for college athletes, and Bembry asked Thomas for his opinion on that. He responded by talking about Addul-Jabbar (the tallest player in the photo above with Coach John Wooden and teammates): "Kareem is very vocal about this topic. He talks about how much he loves UCLA and how much he loved his experience there, but he also talks about how much they exploited him." Yeah, Kareem got stuck with a "lousy" history degree at UCLA, player of the year honors and three national championships. That's real exploitation. Gee, do you think a good interviewer might have questioned Thomas's claim in light of the book Abdul-Jabbar released last year: "Coach Wooden and Me: Our 50-Year Friendship On and Off the Court."

Thomas compared college athletes to people in the third world earning pennies for a corporation making millions. Yes, the same guys that the University of Arizona would gladly entice to its program for a paltry $100,000. The same athletes wearing gold jewelry and, in some cases, driving to campus in their brand new cars, courtesy of boosters who really like to win.

LeBron James can relate to Kareem's hard times, too. Recently, that big, nasty Laura Ingraham told him to shut up and just dribble the basketball. It's awfully hard to score 30 points a game, rake in millions of dollars and play in the NBA Finals almost regularly -- under that kind of heat!

To this, Thomas says, "It’s hard right now for us to disagree without being disagreeable. We should be able to sit down and voice our different opinions without having to attack each other. And that’s what usually happens, and athletes bear the brunt of that."

James has tried to voice his opinions without attacking others. Sure his approach was a little rough, calling the president of the United States a "bum" in a diplomatic-lite tweet. And then appealing again for civility by saying on his website that President Trump doesn't give a f--- about people. Rough times indeed for today's jet-setting millionaire jocks. Tough work if you can find it.

James really inspired Thomas, though, when he and the entire Miami Heat team wore hoodies in honor of Martin after George Zimmerman killed him in self-defense. Thomas says the photo of the Heat team in hoodies is "an iconic image. Like the picture when Kareem and Bill Russell and all those other guys were supporting Muhammad Ali, I think it’s one of those pictures that will go down in history." Thanks for the reminder, I'd forgotten about the hoodies photo.

Thomas's book includes interviews with Martin's brother and a lengthy list of liberals, including Carlos and Abdul-Jabbar; media libs Michael Wilbon, Bomani Jones and Shaun King; NFL activist-players Eric Reid and Michael Bennett, who protested the anthem; Golden State Warriors' coach Steve Kerr and numerous others. The book addresses social justice, mass incarceration and other pet leftist issues. Thomas encourages athletes of the future to use their voices for change, and writes that “Trump may have unintentionally added fuel to the fire of justice.”

There's really no reason to buy the Thomas book. You can read the same victimization tripe on The Undefeated website any time. So save your money.