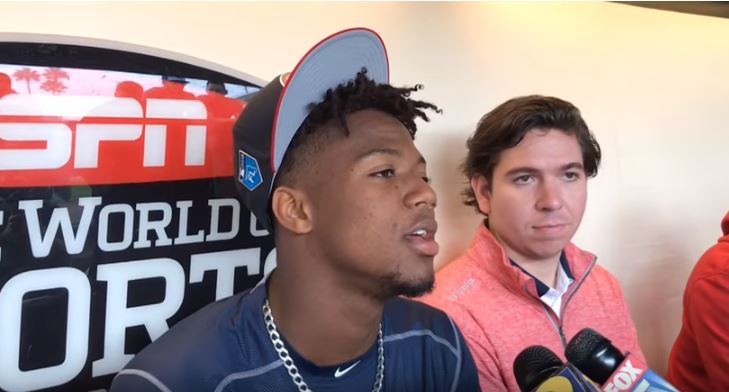 Carron J. Phillips is as inventive as any race-baiter who ever came down the pike. The overly sensitive New York Daily News sports columnist only has one card in his deck and it's a giant-sized race card. With a hairpin trigger finger, he's ready to play it at the drop of a hat. Or, in this case, a hat turned slightly to the side of one baseball player's head. You won't believe how he turned a molehill into Mt. Everest.

The Atlanta Braves require their players to wear their hats straight and with the trademark "A" facing the camera during media interviews. When Ronald Acuna (above photograph), black Venezuelan player and the No. 1-ranked minor league prospect in baseball, did an interview with his hat cocked off to the side of his head, the Braves reminded him to follow the rules. There was no punishment or fine, but Phillips went off the deep end on the Braves, baseball and President Donald Trump. He predicted racial politics will be the downfall of baseball.

"This is baseball, where playing the right way is a subtle way of saying “play the white way,” charged Phillips, an African-American.

Braves' manager Brian Snitker said the Braves want to assure their players respect the game, the organization and the team logo on the hat. He said "we don’t do things like everybody else." It seems like good business to require employees to represent the organization well, but in the infinite wisdom of Phillips it's over-the-top racism:

"Snitker’s words are exactly why baseball's popularity continues to nosedive, and why people of color don’t want anything to do with the game. Because something as simple as wearing a hat gets old white men so angry that it gets your name in headlines before your batting average can ever do it for you."

Phillips linked "hatgate" to a whole series of past racial grievances in attempting to portray the fabric of baseball as hate-spewing and racist, including the day Donald Trump was elected president:

"Ever since the night of Tuesday, Nov. 8, 2016, we’ve seen a resurgence of very public displays of racism. People feel empowered to spew their hate, especially when it’s so regularly done from the Oval Office."

Somehow, in Phillips' fertile imagination, the Acuna story rivals the onslaught of prejudice directed at Jackie Robinson when he broke baseball's color barrier in 1947! Of Robinson and Acuna, Phillips writes: "Two different situations with the same underlying tone. We don’t like the fact that you’re here.” More of these wild-eyed exaggerations continued.

Phillips tied Acuna to a team of Little Leaguers from Chicago, the Jackie Robinson West team, that was stripped of a title for "residency issues." It's also tied to the person(s) at Boston's Fenway Park who last year called Baltimore outfielder Adam Jones the "n" word. As well as to former major leaguers Mike Schmidt and Jerry Remy who believe Latin players should learn English.

"Baseball's tired. It's a tired sport, because you can't express yourself. You can't do what people in other sports do. ... You want kids to play the game, right? What are kids playing these days? Football, basketball. Look at those players — Steph Curry, LeBron James. It's exciting to see those players in those sports. Cam Newton — I love the way Cam goes about it. He smiles, he laughs. It's that flair. The dramatic."

Phillips said of Harper's remarks, "You know it’s bad when a Mormon can point out the glaring racial subtleties that are stitched into the DNA of baseball." Baseball's alleged racist overtones explain to Phillips why only 7.7 percent of major league baseball players and three managers are black.

"Baseball is like a patient that’s on its deathbed who repeatedly refuses treatment because the doctor is a person of color," Phillips concluded in a series of classic exaggerations.

After reading Phillips' sensationalistic accusations, we can conclude with some fitting analogies of our own. Real journalism is ailing at The New York Daily News because it's not stitched into the paper's DNA.