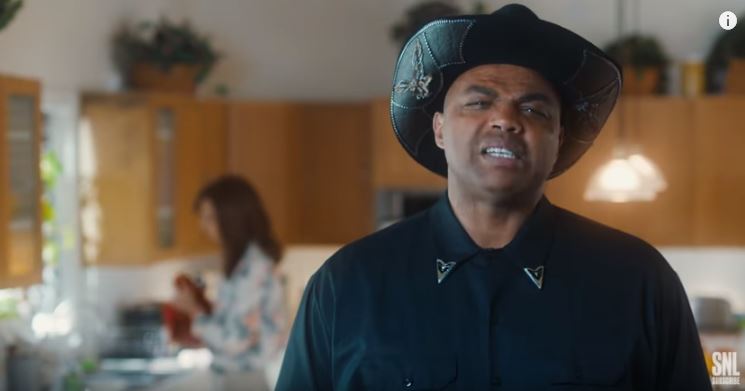 Charles Barkley played to adoring reviews from left-stream online media in his fourth appearance on Saturday Night Live this weekend. Barkley took on gun rights advocates and opponents of athlete protests, leading SBNation's James Dator to write that he "perfectly mixed humor and his message on athlete protests." Slate's Matthew Dessem focused on a segment deriding the NRA's plan to solve school shootings by throwing more guns at the problem and comparing Second Amendment advocates to "cockroaches."

In his opening monologue, Barkley stuck up for protester athletes and referred to "the lady at Fox News" (Laura Ingraham) who told LeBron James to "shut up and dribble." Barkley responded:

"I'm an athlete, and athletes have been speaking out a lot this year. They've been kneeling during the anthem, refusing to go to the White House. A lot of times, athletes are worried that speaking out will hurt their career. Here's something that contradicts all of that: Me.

"I've been saying whatever the hell I want for 30 years, and I'm doing great."

“This country’s had a great tradition of athletes speaking their mind. Muhammad Ali changed the way people thought about Vietnam. Jim Brown had people thinking about race. Michael Jordan even thought it was okay for humans to play with Looney Tunes.

“So LeBron, keep on dribbling — and don’t EVER shut up. And maybe one day you can host SNL for a fourth time, just like me.”

Barkley also criticized the way Fox News once characterized his appearance at a barbecue, prompting praise from Dator:

"The mix of comedy and hard-hitting commentary in the monologue was great, even if Chuck tripped over his wording at times. He pointed out how FOX News said he was attending a 'hip hop barbecue,' when the majority of attendees weren’t even musicians. He said that he will always proudly stand for the national anthem, but that doesn’t mean we should try to curb anyone’s rights to do the opposite. In the end he closed with a powerful message that got raucous applause from the crowd."

In an SNL spoof satirizing the problem of school shootings, Barkley (photo above) plays pest control man Ned, who denigrates Second Amendment rights and analogizes gun rights supporters as gun-carrying cockroaches. Ned is a cowboy-hat wearing exterminator who assures that only high-character, God-fearing, church-attending cockroaches are given AR-15s to kill off home infestations of pest cockroaches. "And none of my roaches are gay!" Ned declares. "Plus my roaches are trained to teach their babies how to shoot, creating a cycle that there'll be gun-carrying roaches in your home for good." For really bad roach problems, there's Ned's Roach Away Max with bump stock.

Ned says some people might ask if arming roaches would just add to the problem. His answer? "That’s so dumb it makes me mad."

Dessem says Ned's armed cockroaches fight infestations the "NRA way." He explains it this way: "If that (arming cockroaches) sounds like a terrible idea to you, you just don’t understand the second amendment and probably go around referring to 'magazines' as 'clips.' Let Ned break down the relevant constitutional law before you embarrass yourself further." And, he adds:

"The idea that the solution to school shootings involves more guns somehow—well, to believe that, you’d have to have a brain the size of an insect’s."

Here's one review of Barkley's performance that isn't so favorable. Jordan isn't the only former athlete whose name can be mentioned in the same breath as Looney Tunes.