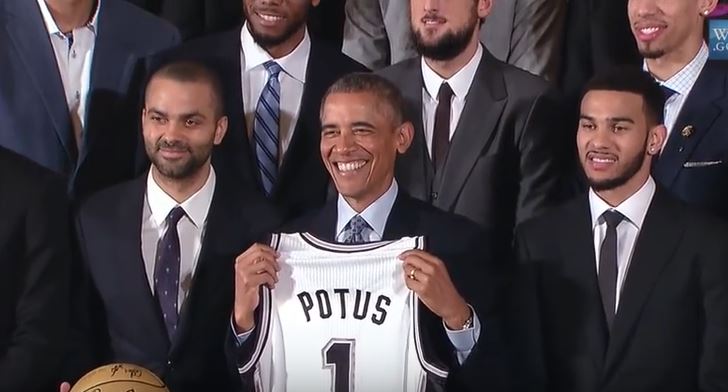 Basketball-loving Barack Obama has an eye for shooting hoops that rivals the awful vision of Mr. Magoo. But according to The Huffington Post, the former president with a vivid imagination and an ego the size of Texas, would choose to play for the San Antonio Spurs ... if only he was an NBA all-star free agent.

Will the delusions of grandeur never end for the former president? During a White House Easter celebration, Obama once picked up the rock and made a very public display of a dreadful 2-for-22 shooting embarrassment! (next time try layups!) Kahron Campbell, then 10, was there that day, and said, “He couldn’t make one. I had to help him out.” (Spoiler alert: The Huffington Post did not mention Obama's poor basketball abilities.)

About that Spurs' contract, "Mr. Basketball," dream on, but don't quit your day job!

"At an MIT Sports Analytics Conference in Boston, Obama said that as a player he would seek out the five-time champion Spurs because they satisfy his checklist for ideal organizations."

Obama said of the team he invited to the White House to celebrate a past NBA championship, “They’re smart, they’re well-run, they’re focused on team,” he said. The president who trashed police officers and used the IRS to punish his political enemies, said the Spurs “treat everybody in the organization with respect, and that is the kind of organization that I want to be a part of.the last 15 years in basketball, San Antonio would be a great example of that.” And you are not, sir.

Obama's track record of organizational success includes his "Department of Injustice" and skipping intelligence meetings. Maybe he was too busy watching college basketball to prep for his March Madness bracket? He needed to look good for those appearances on ESPN to reveal his tournament picks! He did succeed at leaving Americans behind in Benghazi, arming Mexican drug cartels and rewarding solar power companies on the brink of going belly-up. But, hey, Obama loves hoops and he's The Huffington Post's main man! If he wants to dream, let him dream big.

If Obama played for the Spurs, he'd feel right at home with a head coach, Greg Popovich, who rips on Republicans. Coach Pop branded President Donald Trump as a "soulless coward," and Dicker calls him a "socially conscious fellow."

Told of Obama's interest in playing for his team, Popovich joked that he heard Obama has done some things that "aren't very good" and he'd do a background check on him. What? Vetting a Democrat? A novel idea to The Huffington Post and other left-stream media.