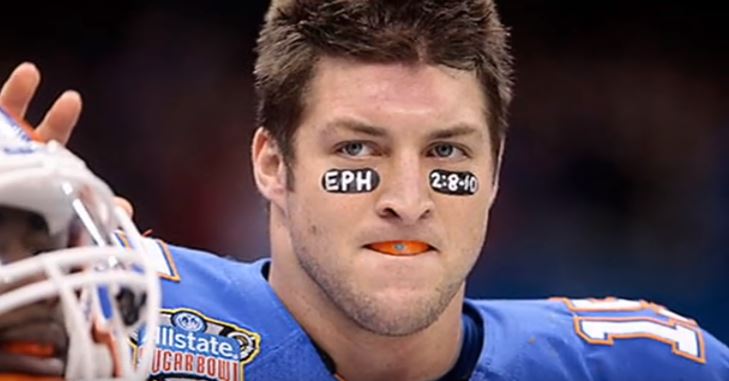 With Billy Graham now walking streets of gold in Heaven, Mike Bianchi of the Orlando Sentinel thinks Tim Tebow would be awesome as the next great American pastor or as president. The thought of either happening nearly sent Patheos writer Sarabeth Caplin's head spinning. Also a contributing writer for The Huffington Post, Caplin belittled Tebow as a stumbling, anti-abortion, anti-LGBT conservative who has little more to offer than charisma.

In a recent editorial, Bianchi wrote the unthinkable: "Like Graham, Tebow has the incredible charisma to inspire the masses, the impeccable character to avoid scandal and the uncanny political ability to be beloved and respected by both Republicans and Democrats alike. And like Graham, he has the cult of personality to fill football stadiums and counsel presidents."

Caplin, the author of "Confessions of a Prodigal Daughter," implied in her response that Tebow is a clumsy oaf (another Gerald Ford in the making?) who sprained his ankle yesterday when he stepped on a sprinkler head. "That’s the guy who 'will someday become the most influential Christian leader in our country,'” she wrote in disbelief, along with this:

"Has the evangelical reputation sunk so low that the new standard of morality is 'charisma' (which every great cult leader has, by the way), avoiding scandal (it could just mean you’re good at not getting caught), and the ability to 'fill football stadiums'? Really?"

The comment by Bianchi that angered Caplin most was this one: "if a controversial reality TV star can become president, then a unifying sports figure and compassionate Christian can certainly get elected as well." She yelled her disapproval in all-caps: "THAT’S NOT A GOOD THING, MIKE!"

Caplin had written in her 2012 book that Christians are called "to go against the ways of this world," but she denigrated Tebow for not going along with the worldly acceptance of abortion. Caplin wrote that when he has "weighed in on certain issues, like during his 2010 anti-abortion Super Bowl ad for Focus on the Family, he wasn’t exactly trying to win over large swaths of Democrats." If he's a "typical evangelical model, then he’s going to align with the Right and piss off the Left. That’s just the way it is."

She scoffed at Bianchi's belief that Tebow, who was known as a football player for wearing Bible verses on his sun glare face patch "is apparently not polarizing." As a typical evangelical model, a politically motivated Tebow would not understand policy, Caplin says. She warns him:

"You can’t satisfy everyone with your abortion stance. You won’t please white evangelicals if you support LGBTQ rights. You’re going to lose the GOP base if you speak in positive terms about immigrants."

Caplin said Tebow deserves admiration for his philanthropic history, which is more impressive than anything Trump ever did. "But if we’ve learned one thing given evangelicals’ support for Trump before and during his presidency, it’s that a person’s 'good deeds' are irrelevant. All that matters is appointing anti-abortion judges and having an 'R' after your name."

Bianchi's ringing endorsement of Tebow as a potential religious and political leader did bring some relief for Caplin, who noted, "At least he didn’t choose Pat Robertson or Josh Duggar."