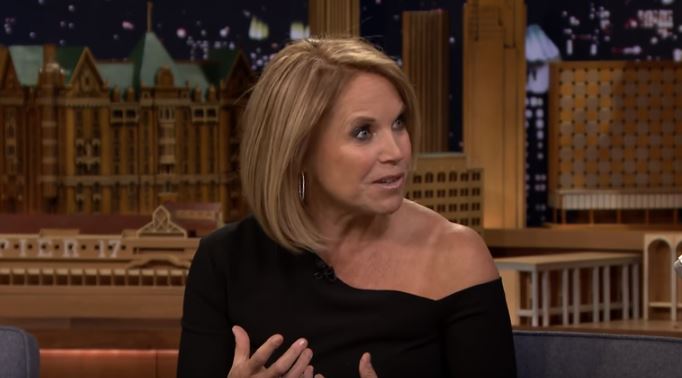 You've heard of push polling in which pollsters steer people to a desired opinion by asking loaded questions. The Ringer blog's Larry Wilmore has perfected the "push interview," and with Katie Couric as his guest this week, his attempts to push a fellow liberal to support for LeBron James and gun control while hanging a racist label on Laura Ingraham amounted to a cakewalk.

Host of the Black on the Air program, Wilmore dominated the interview with Couric. He cut her off a couple times and five of her comments got only one line on the blog page.

Their consensus is that Lebron James needs to answer to no one and he owes no apology for profaning the president. They also argued that Ingraham is intelligent but she's a racist and, in the wake of school shootings, we've got to have gun control.

Couric began by qualifying herself as a respectful person in an "insulting culture" who argues "on the merits" rather than saying "the most hurtful thing you can possibly say." To which Wilmore completely agreed.

That insulting culture only goes one way though. Liberals have a green light for insult; conservatives do not. Couric said Ingraham expressed what "felt like unmistakable racial undertones, or overtones, or both." I think that what was really interesting is the idea that LeBron James cannot use his voice and express his opinion is so, I think, un-American." Couric said Ingraham's directive to James to "shut up and dribble" were "such a low blow and so below the belt."

James got a pass from both liberals though he called President Trump a "bum" and said he "doesn't give a fuck about people." That's not hitting below the belt or saying "the most hurtful thing you can say." James is a "god" in the liberal world and he is insulated from criticism from the Left. Total James worship ensued in the discussion:

WILMORE:"He is inarguably the greatest player of our time right now, right? And also, LeBron James is a transcendent figure for his fans because he’s done so much in his community."

COURIC: "Hasn’t he given something like $41 million to [charity]?"

WILMORE: "Katie, it’s ridiculous what LeBron James—he doesn’t owe anyone an apology for what he’s done both on and off the court, right? He’s one of those people, he lives and breathes the type of example we want our sports figures to be. And he was talking about the president in this thing with Cari Champion, but he was speaking about the president in the context of leadership, not in terms of policy and politics and Democrat/Republican, not in those terms. LeBron James doesn’t have enough time for partisan politics; he’s not into that. But he was speaking about how when he was a kid—"

WILMORE: "Yes, the people he looked up to. And as a kid, for him, it was president, sports figure, entertainer. For him, he was hoping those people would say the right things and be the people you look for. And he expressed the disappointment that the president wasn’t that for him. And then he’s attacked by Laura Ingraham, of all people, on her show. And the manner of her attack is what really disappointed me."

Wilmore pleads with Couric on why King James' (profane) message can't "just be embraced, or just ignored? Why does he have to be insulted?" Couric quickly responds, "I think it was sort of how demeaning her comments were that just felt -- " Wilmore cut her off and said. “Laura, if you don’t understand why that has racial implications, you need to do your homework." He claimed Ingraham would not have treated Jackie Robinson and Jesse Owens the same way, which is correct because neither of them profaned the president.

Switching to school shootings, Couric praised the students who marched for gun control. She said "even though the families of Sandy Hook tried to advance legislation and change things, and are making some progress on a state level, they didn’t have, tragically, [what] these high school students seem to [have] in this sweet spot of really talking about these issues. Their outrage is so palpable, and their anger is so raw, and their desire to change things is so inspiring. I’ve been really marveling at that."

These raw, young, angry people are inspiring Wilmore, too: "I’m emotional right now because they make me emotional when I hear their cries, because their eloquence is what touches me. They’re so clear about what the real issues are that their lives are being almost like a political ball right now."

Then "gracious" Katie, who doesn't believe in insulting dialogue, chimes in with, "Yeah and you kind of contrast them with the people who have been on Capitol Hill for decades and you know, bought and sold by the NRA and so warped in their perspective and so, I don’t know, narrow-minded and unopened to even a conversation and you contrast that with these sixteen, 17-year-old kids. I mean, these kids were fourteen years old."