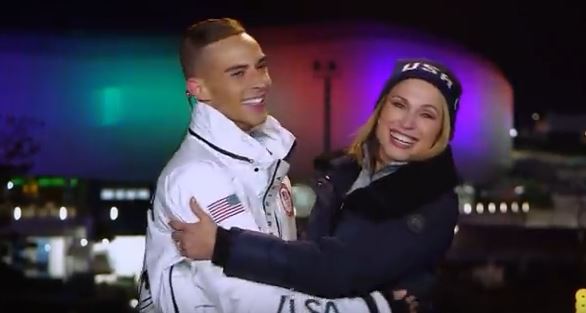 You'd be hard-pressed to find a USA bronze-medal winner who reaped so much media adulation -- ever. To Greenberg, he is the most interesting homosexual athlete in the world:

"Adam Rippon’s edges are sharp. His wit is sharper. And his eyebrows are sharpest of all.

"The 28-year-old openly gay figure skater emerged as the most joyful and candid star of the 2018 Winter Olympics. [Was anyone else given a chance, or even half the air time?] With his performances and personality both drawing rave reviews, Rippon has made history, friends, and an impact on his own terms.

“He’s owned these Olympics,” NBC announcer Terry Gannon said during the broadcast of the men’s free skate. “He’s made them his.”

No, the media made Rippon theirs. It goes beyond hilarity how celebrated you are when you're homosexual, have some athletic ability and hate Republicans.

Media libs are practically tripping over each other to exalt the new king of winter sport. Judges thought his routine too easy to give him the gold, but Good Morning America's Amy Robach gave him a big on-air hug (see photo).

Greenberg had his best Olympic coverage of Rippon by listing several ways "that Adam has been living his best Olympics in Pyeongchang." (It almost sounds like a Joel Osteen "Your Best Life Now" echo chamber). How much does Greenberg worship thee, Adam? Let us count the downright silly ways:

1) He's a pioneer and a role model. "Adam Rippon is allowing America to love a (really) gay athlete."

2) "He dazzled slayed in his Olympic debut."

3) "He helped Team USA win a bronze medal" and he did it with one of his best friends (U.S. figure skater Mirai Nagasu)! (Un-be-lievable!)

5) "He's getting shouted out by future friends Reese Witherspoon ("keep making us all so happy") and Britney Spears" (Adam, "you are the most fun").

6) "He's sharing what(ever) is on his mind, but he's also revealing some hard truths." (While skating he thought: "I want to throw up. I want to go over to the judges and say, can I just have a Xanax and a quick drink?")

7) "He's speaking truth to power" (interpreted: he's out there pitching for the LGBT agenda). (Asked by USA Today if he would meet with Vice-president Pence, Rippon responded: “You mean Mike Pence, the same Mike Pence that funded gay conversion therapy? I’m not buying it.”)

8) "Appreciate his eyebrows. But hear his message. Sure, Adam’s eyebrows deserve to be recognized. They are special. But look past them and see a meaningful message of shared experience and sameness that transcends our differences."

9) "In the spotlight, he kept on amazing with his short program."

12) "He got to hang out on Sesame Street." (That alone should have been deserving of a Gold Medal!)

14) "He still finished competing on a high note. With another poetic, fluid performance in the men’s free skate, Adam finished 10th overall. Off the podium, but still unforgettable.'' (Hey, cameraman, forget those three on the podium! Focus on Adam!).

15) "NBC offered him a gig, but he's remaining an Olympian." (Sealing the legacy of the Rippon Games!).

Surprisingly left off the list of Rippon's greatest Olympic moments was his disparaging review of the "generic" condoms in the Olympic Village.

What's left for Rippon to accomplish after living his best Olympic life? The media will milk him for all he's worth. A Dancing with the Stars appearance is likely. Adoring lib media will likely plaster his face all over our television sets. There's GMA, the Today Show, The View, the late night shows and probably much more. Rippon mania makes Ferris Bueller look like an unpopular nerd by comparison. O-ver-kill! Thank God for the remote control!