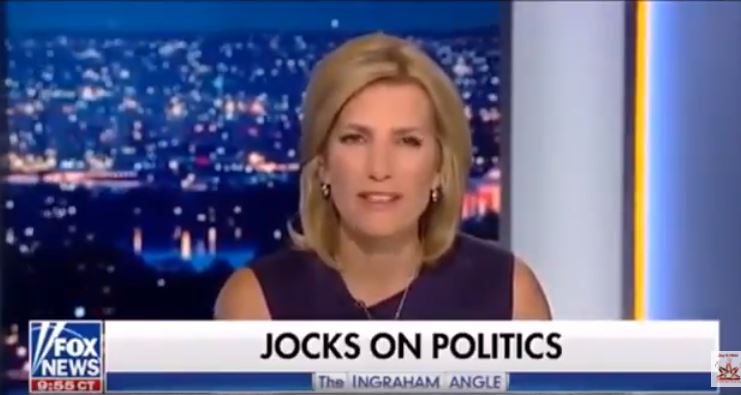 Laura Ingraham scored a memorable hit on anti-war liberals with her 2003 book "Shut up and Sing: How Elites from Hollywood, Politics, and the Media are Subverting America." After NBA stars LeBron James and Kevin Durant criticized President Trump yesterday, Ingraham issued a verbal variation on that zinger, rejecting their political commentary by telling them to "shut up and dribble."

Her remarks came last night on the Fox News program she hosts, "The Ingraham Angle." Earlier in the day on James' Uninterrupted website video, he and Durant issued negative remarks on President Trump. They were queued up for their comments by ESPN SportsCenter host Cari Champion, who interviewed them as she drove them around James' hometown of Akron, Ohio.

Ingraham prefaced the playing of the video by saying, "NBA star LeBron James is talking politics again, and this time it's R-rated. Here's a barely intelligible, not to mention ungrammatical take, on President Trump in a new ESPN podcast":

James: “The climate is hot. The No. 1 job in America, the appointed person is someone who doesn't understand the people. And really don't give a f--- about the people. When I was growing up, there was like three jobs that you looked (to) for inspiration. It was the president of the United States, it was whoever was the best in sports and then it was like the greatest musician at the time. You never thought you could be them, but you can grab inspiration from them.

“With the president of the United States, it’s at a bad time. While we cannot change what comes out of that man’s mouth, we can continue to alert the people that watch us, that listen to us, ‘This is not the way.' It's not even a surprise when he says something. It's like laughable. It's laughable and it's scary."

Durant: “I feel like our team as a country is not ran by a great coach.”

James had previously appeared in a PSA for ObamaCare, and that tells you everything you need to know about his politics. Both players virtually promised to launch more shots in the "social justice league" going forward.

Ingraham lashed back, “Must they run their mouths like that? Unfortunately, a lot of kids — and some adults — take these ignorant comments seriously. Oh, and LeBron and Kevin: You’re great players, but no one voted for you. Millions elected Trump to be their coach. So keep the political commentary to yourself or, as someone once said, shut up and dribble.”

The Fox host also called a "personal foul" on James' credibility because he went straight from high school to the NBA, forgoing a college degree:

"Look, there might be a cautionary lesson in LeBron for kids: This is what happens when you attempt to leave high school a year early to join the NBA. And it’s always unwise to seek political advice from someone who gets paid a hundred-million dollars a year to bounce a ball."

Ingraham's comments unleashed a torrent of tweets from angry liberals, including James' pal Dwyane Wade, of the Miami Heat. Wade tweeted that Ingraham's remarks were just further evidence of racism: