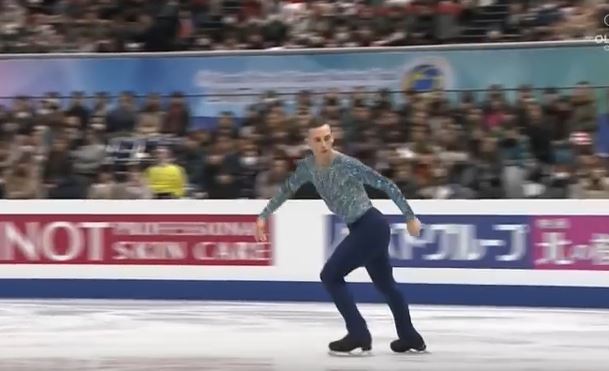 In reporting on the Olympic Games, America's sports media has predictably established itself as a mouthpiece for the LGBT agenda. Yesterday The Washington Post and USA Today featured a gay skier, and this morning's issue of USA Today focuses on a gay figure skater who's angry that Vice-president Mike Pence will lead Team USA in the opening ceremonies.

USA Today is no friend of Vice-president Pence, and Christine Brennan is just its latest writer to assail him. She focuses on homosexual figure skater Adam Rippon's (see photo above) criticism of Pence's involvement with the upcoming Winter Olympics.

“If it were before my event, I would absolutely not go out of my way to meet somebody who I felt has gone out of their way to not only show that they aren’t a friend of a gay person but that they think that they’re sick.

“I don’t think he has a real concept of reality. To stand by some of the things that Donald Trump has said and for Mike Pence to say he’s a devout Christian man is completely contradictory. If he’s okay with what’s being said about people and Americans and foreigners and about different countries that are being called ‘s---holes,' I think he should really go to church."

Rippon said he would consider meeting Pence after the competition, even though the VP doesn't represent his values. But he will not attend any post-Olympic ceremony at the White House.

Forty-one states permit conversion therapy for people struggling with unwanted same-sex attraction, but Brennan tried to portray the VP as a pariah for supporting their choice. She mentioned a "widespread belief" that Pence supports conversion therapy.

Yesterday, Rick Maese of The Washington Post wrote how U.S. freestyle skier Gus Kenworthy has been performing better since he came out of the closet two years ago. Coming out is, of course, always a good career move, at least in the media's estimation. Kenworthy's brand has also taken off since then, Maese raves:

"He still has to qualify, but he’ll probably enter the PyeongChang Olympics next month as a star — not just a podium regular but a champion of the LGBT community who’s featured in shampoo commercials, who’s outspoken on political issues and whose profile suddenly transcends that of his sport.

"More than anyone, Kenworthy is surprised at how this has all played out, how coming out of the closet actually improved his performances in both the half-pipe and slope-style events, how friends buoyed him and his fan base grew, and how sponsors came out of the woodwork to sign him up."

Maese also wrote Kenworthy said he feels “quite victimized under the current administration. ... I want to do well for our country — to be an out, gay person who does well for the U.S., despite everything that’s happening in our country.”

Yesterday, USA Today posted an Associated Press feature on Kenworthy, who promises he won't attend any ceremony at the White House.

You can bet your bottom dollar NBC hypes LGBT athletes when the Games begin in February. Four years ago NBC's Vladimir Pozner, who called Russia a "homophobic" country, and Bob Costas won the GLAAD Gold Medal for LGBT Inclusion for "explaining the anti-LGBT backdrop" to those Games.