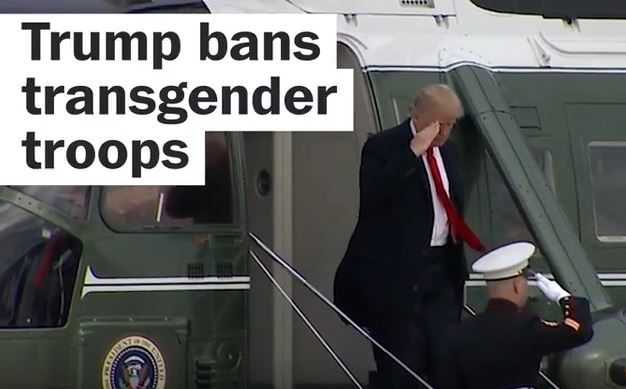 Bieler said "both were unsparing in their criticism." Allen, who went off on Trump may have put himself in the running for the 2017 Arthur Ashe Award for Courage, given by ESPN with his angry outburst:

Allen ought to know better what's needed in the military. Now 42, he's the son of an Air Force veteran.

"What happened to the most powerful person in this country bringing everyone together?? What a shame!!" Allen complained. Ray, there are plenty of ways to unite America without sending troops confused about their gender out to do battle with ISIS.

Jenner, who voted for Trump and attended his inauguration, said:

"I believe every American should be outraged by the disrespect shown to those people wearing our country's uniform."

Jenner tweets a question to Trump, asking, "What happened to your promises to fight for them?" Defending our way of life is not beholden to those who are sexually confused; it's total commitment should be protecting a nation of 330 million people with the best fighting force possible.

Jenner calls the decision a "disaster," but she's not concerned about your interests -- only the radical agenda of the LGBT change agents. Her next quote proves that:

When it comes to all equality issues, for the entire LGBT community, what we need is federal guidance. Just like the previous administration said that it was okay to serve as a trans person in the military. We have front-line people, okay? I'm talking Marines, trans guys, on the front line, fighting for our country. I'm trying to get, especially the Republican party, to make a change."

She also talked of how for the last few years the Pentagon assured transgenders can serve openly in the military.

By providing these lefties a crying forum, the Post proves again that it's got a hard-left agenda.