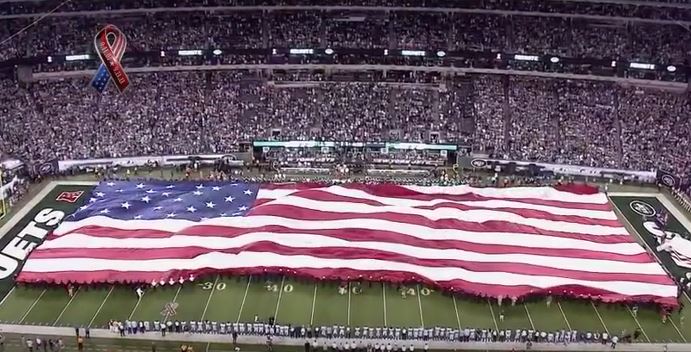 Douglas Goetsch was once a single, cross-dressing poet and a teacher at the University of Iowa, New York University and Western Kentucky. Battling depression and craving femininity, he broke up with his girlfriend and "Jennered" over to "womanhood." Douglas is now "Diana" and "she" just penned a vicious attack on America and much more, all in the name of Colin Kaepernick.

Published by the Chicago Tribune today, Goetsch reviewed much about Colin Kaepernick that has been hashed over adnauseum in recent months. She broke no new ground on the fact that several unimpressive backup quarterbacks found jobs in this season of free agency, while Kaepernick has not. And repeated the well-worn complaint that players arrested on charges of domestic violence have jobs in the NFL and unhappy Kappy does not.

The writer's unique "contribution" (broadside is more like it)  is a deep, deep contempt for the Star Spangled Banner, the NFL, the U.S. military, public safety officers, baseball, capitalism and patriotism. Apple pie is one of the few American traditions spared from this poison pen. The problems exposed by Kaepernick's continued free agency actually run deeply through Americana, Goetsch believes.

"What's worse in the eyes of the NFL — players beating women or kneeling for the national anthem?" Goetsch asks. "Answer: kneeling, and it's not even close." The writer also complains that fans are told [they are actually asked] to rise for the singing of The Star-Spangled Banner, which "is a pompous battle number."

Griping about the NFL wrapping itself in the flag lately -- "flags the size of cornfields" -- Goetsch also attacks the pageantry accompanying the national anthem, including "military flyovers, color guards and lots of people in uniform saluting."

While fans do it out of habit or peer pressure, saluting the flag before a football game makes about as much sense as reciting the Pledge of Allegiance before seeing a movie or walking the dog. NFL games are contests between privately owned companies that exist for the profit of their owners. All appearance otherwise is marketing, which includes the pink equipment players are encouraged to wear during Breast Cancer Awareness Month; the red, white and blue NFL shield; or the branding of football as "America's game."

This is all related to the supposed evil of nationalism, which began with "one of the great marketing stunts in the history of American business": a congressional rubber stamping of the myth that Abner Doubleday invented the sport of baseball. "In reality, the roots of baseball are about as American as the awkward melody of our national anthem, which was taken from a British pub song."

Goetsch asserts Kaepernick's silent protest (if his recent angry tweets constitute "silence") stems from "an untreated epidemic of police brutality ... is in line with a tradition of nonviolent resistance in America, from Thoreau to Rosa Parks to Muhammad Ali, challenging us to form a more perfect union." Goetsch juxtaposes this by charging the NFL has marketed itself "by steeping 180 million fans in a narrow and authoritarian version of patriotism: Support the troops, salute the flag, shut up and play football."

Finally (and thankfully!), Kaepernick is jobless because he "offends too many fans, and scares its sponsors, thereby jeopardizing revenue," Goetsch concludes.

We aren't surprised at all by this, but Goetsch's bitter diatribe is further evidence that our wayward state universities are breeding venomous, anti-American views among faculty and students. And their friends in the left-stream media are all too happy to give them ink and cyber space.