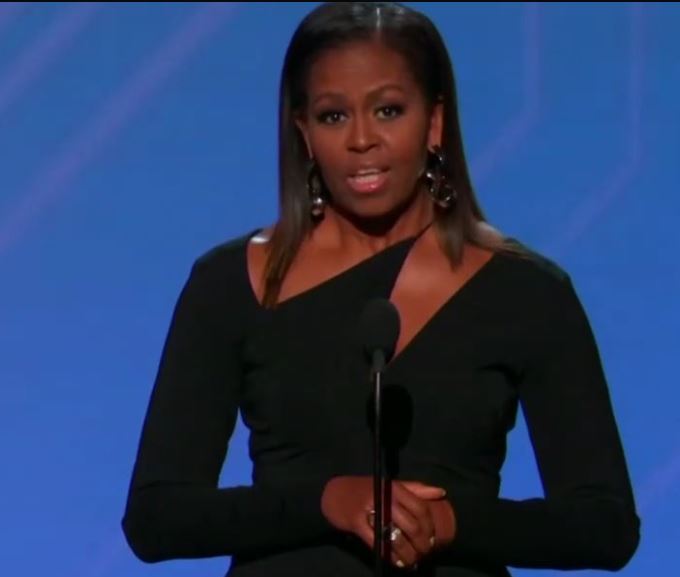 The 25th ESPY awards were cruising along. Peyton Manning was hilarious as host. His comedy was sparkling. Peyton, the newest and overly competitive resident at an assisted living center, cheating to beat seniors at shuffle board. Peyton, the happy host of a Super Bowl party, assuring his friends the game was "over" and the Falcons were assured of victory, only to grow more agitated as the Patriots rallied to win and finally chucking a football through the TV screen.

But then near the end the DNC rally began. Former first lady Michelle Obama came out to present the Arthur Ashe award. The audience nearly swooned as this Democrat star graced them with her presence. She described the great achievement of Eunice Kennedy Shriver, the late sister of John F. Kennedy and founder of Special Olympics.

I am here tonight to honor a remarkable woman. A woman who believed that everyone has something to contribute and everyone deserves a chance to push themselves to find out what they're made of and to compete and win. She knew that when we give others a chance to fulfill their greatest potential, we all win. So nearly 50 years ago, she created the Special Olympics. And over the course of her life, she turned that visionary idea into a worldwide movement, with competitions across the globe. Through her passionate service, she made our world more welcoming, inclusive and fair. Not just for the athletes she empowered, but for us all. And she honored the highest traditions of athletic history, using sports to break barriers and change hearts and minds. So alongside heroes like Jackie Robinson, Billie Jean king, Muhammad Ali, and Arthur ashe, there's Eunice Kennedy Shriver.

Taking nothing away from Eunice Kennedy Shriver, there was just one problem here. Mrs. Obama's husband, Barack Obama, once delivered the greatest insult Special Olympians have ever suffered. In March 2009, while appearing on television with Jay Leno, President Obama said of his poor bowling abilities ...

"I bowled a 129. It's like the Special Olympics of something."

Thud. The former president did apologize, but not before Mrs. Shriver's son Tim, current head of Special Olympics, said "these moments can worsen the stereotypes of people with special needs."

Sarah Palin said at the time, "This was a degrading remark about our world's most precious and unique people coming from the most powerful position in the world."

Back to the ESPY's, Mrs. Shriver's son Tim came to the stage to accept the Arthur Ashe Courage Award. The entire tone of the ESPN awards show had turned. It had the feel of a DNC convention. He sounded like a political candidate throwing bones to women and the "equality" crowd.

I'm proud to be joined by these special olympians who represent millions of athletes around the globe. And accepting the Arthur ashe award for courage on behalf of Eunice Kennedy shriver, her son, Tim shriver.

Anyone who knew my mother, you could see, she didn't just love to compete. She loved to win. People told her, because she was a woman, she couldn't be an athlete, couldn't lead, shouldn't push for people with intellectual disabilities. Wrong, wrong, and wrong. My mother knew one thing. The athletes of Special Olympics have the same dedication, the same commitment and guts, and deserve the same glory as any other athlete competing in this country, or anywhere around the world.

People with intellectual disabilities are still excluded, mocked, left out.

Michelle had to be cringing inside.

But this movement, this movement is no longer only a movement for people with intellectual difference. It's a movement from them, inviting us all to see the world as they so often do. Remove the blinders, remove the fear and stereotypes.

Barack, you had to be thanking your lucky stars you weren't there!

Those are powerful human beings with a message. They can unify our schools and communities. They can show us how to overcome the fear wreaking havoc in the country. So, this is our time. Follow the athletes of Special Olympics, choose to include.