Responding to that decision, Kaepernick issued this highly offensive Tweet: 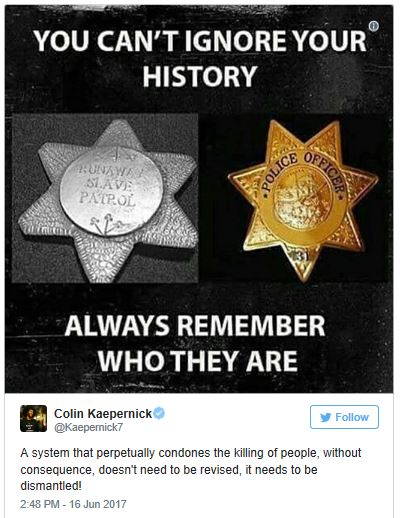 It could well be a career-ending, self-sacking by Kaepernick himself.

Travis said, “Kaepernick helped fuel the fire of this outrage with his incendiary comparison of modern day police to 19th century slave catchers. That Tweet has since been favorited or retweeted by nearly 50,000 people, proving, yet again, that nuanced discourse and intelligent thought does not triumph over rash and inaccurate distributions of fake news on social media.”

Travis said no one protects more black lives than public safety officers, and “the murder rates in cities were Black Lives Matter protesters have been the most active. In just about all of these cities the murder rate has skyrocketed as police have stopped aggressive policing designed to save mostly black lives.”

The idea that police officers are waging war on black people and regularly killing innocent black victims is simply not true or supported by any statistical data. Police officer shootings are extremely rare and police remain far more likely to shoot white people than they are to shoot black people. And when you adjust police shooting data on a per capita basis to account for the fact that black people commit violent crimes at rates far in excess of their population, white people are more likely to be shot by police than black people even though they produce less crime per capita. 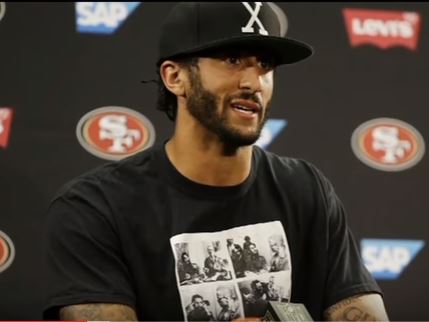 The bottom line for Kaepernick, Travis says, is his NFL career is finished, done.

So for Colin Kaepernick, who worked out last year in socks picturing police as pigs and praised Fidel Castro while taking a knee for the national anthem, his decision to compare modern day police officers to slave catchers is likely to ensure that his NFL career is over. … If an NFL team wasn’t willing to employ him before this Tweet, why would any NFL team employ him now? I believe that Colin Kaepernick’s NFL career is officially over.

After this indefensible Tweet lashing out against public safety officers,  Kaepernick’s usual left-wing supporters largely went cricket mode. Most of the online reactions came from conservative sources. One exception though came from CBS Sports’ John Breech.

“If Kaepernick has proven one thing over the past 10 months,” Breech wrote, “it's that he's not going to stray from his message at any cost, even it means that NFL teams won't sign him. … Don't look for Kaepernick to change his ways just to get an NFL job, though. If the quarterback has proven one thing over the past 10 months, it's that he strongly stands for what he believes in, and he'll likely continue to do that even it costs him a chance at getting another shot in the NFL.”