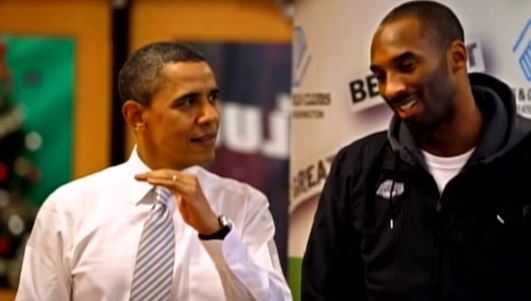 In “What Kobe Bryant Misses Most about Obama,” Strauss engages in embellishing Obama’s record and praising his community organizing with pro athletes. Without acknowledging it, he demonstrates how Obama used jocks to further his agenda. And the gullible athletes were all too willing to be used.

Bryant told Strauss of a visit with Obama when he “wanted to know how he got better, from managing his schedule to what he reads. And because he gets sports, and we can talk about that, too, it makes it easier to have that connection.”

Bryant says the ex-prez helped make locker rooms more “politically aware” (worth a separate wing in the Obama Presidential Library?) and he “did help athletes progress beyond just asking questions or just being angry, and asking why something is the way it is.” It’s unsaid in the article, but Obama unwittingly taught athletes the art of the boycott. At times Obama spent more time with them than meeting with his President's Council on Jobs and Competitiveness, which he boycotted for at least a year.

The story dealt with Bryant mainly in the beginning, then fast-breaked into athlete activism and more Obama worship. Strauss wrote: “Obama was famous for his love of basketball, even scrimmaging with pro players on occasion.” Wow, those scrimmages rank right up there with President Reagan’s fame for ending the Cold War and demanding and getting the destruction of the Iron Curtain.

Strauss touted LeBron James for doing a PSA video encouraging people to enroll in the failure that became ObamaCare. And, more recently, when James said that if a racist’s spray-painting of his LA home can shed light on racism then he’s okay with it. Prompting this profound nugget from Strauss:

The sentiment had some parallels with Obama’s “A More Perfect Union” speech in 2008—an effort to have the same conversation about race in the United States.

As Americans gave up seeking employment by the tens of millions, basketball and being “cool” became “critical” to Obama’s political image, Strauss writes. Pickup games on the campaign trail “undermined Republican efforts to portray Obama as foreign, suspicious, or someone who ‘pals around with terrorists.’” Nothing like style over substance.

Obama has left behind an NBA that is now an “incubator of dissent,” Strauss also threw in San Antonio Spurs Coach Gregg Popovich’s “I’m sick to my stomach thinking about” Trump’s election remark.

The Politico lefty acknowledged that President Trump has athlete friends, too, but none of them are advocating for his travel ban.

Strauss also gave love to Michelle Obama’s Let’s Move campaign, which “promoted sports and brought partnerships with pro leagues.” It’s about time we had an administration in Washington that did so much for the world of sports, especially amid the terrorism around the world – and the violence in Detroit and Chicago.

Coming back to Bryant for his close, Strauss softened somewhat. He noted that Bryant would possibly consider a visit to the Trump White House. “That visit is more than how you feel about the current administration. It’s about the guys next to you, about the flag, about the kids out there who look up to you and the United States. But, honestly, it’s a tough call.”