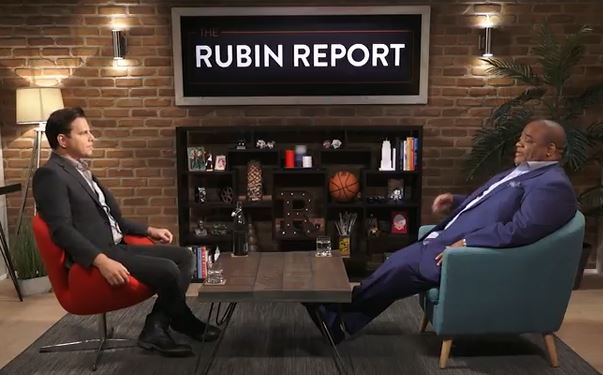 Is Jason Whitlock conservative? Colin Cowherd, his partner of Fox Sports 1’s Speak for Yourself, recently told Whitlock he is considered a “Black conservative.” In an interview with Dave Rubin on The Rubin Report, Whitlock reveals he is conservative on some issues and strongly disagrees with some of the key narratives of the left-stream media.

Asked by Rubin if he’s conservative, Whitlock answered that he doesn’t want to reject the conservative label, but he is “anti-gun.” On the other hand, he first thought Black Lives Matter made sense, but now he calls it “poison.” Whitlock says President Trump is a blowhard and not a conservative. He considers himself part of a resistance movement against the establishment:

Whitlock seeks to emulate his role model, the late Chicago columnist Mike Royko. “You could not predict his position,” Whitlock said. “He came across as honest and fair. (Today) You have to be populist and preach to a choir to be successful in this industry."

My goal getting into this business was, oh I want to be the Mike Royko of sports and that’ll be great and make me popular and people will respect that my positions as reasonable and not be tied to an agenda. Original thoughts that really challenge the establishment are derided and people on social media are trying to silence that.

Twitter, according to Whitlock, is unreasonable and largely tied to an agenda. He said, “Anytime you say anything that doesn’t go along with groupthink, the people over on social media get irate.”

Whitlock says that an overwhelming majority of Americans have nothing to do with Twitter but it’s still a damaging media forum:

It’s not a representation of what people actually think in American society. The media overindex, celebrites overindex, athletes overindex. People who are trying to build brands are on social media, and people that are attracted to people trying to build brands are the people that are on social media. And so because the media overindulges in social media, and because we use it [to] wet our fingers and, oh this the way the wind’s blowing, because Twitter tells me so.

And if Twitter tells you that the police are indiscriminately just killing Black men every night and the media buys into that – oh, the media starts selling that unarmed Black men are being killed and they’ll never address the hundreds and thousands of killings of poor people and people of color is not addressed. There’s no Twitter feed that’s popular that’s out there telling you who gets shot in Chicago every night, every weekend. And so there’s no hysteria around that. They created a hysteria around when the police make mistakes or do something evil, which is very rare. Police don’t want to go to jail; it’s not a good experience for them. The police don’t want to be targets of the vitriol that goes along with killing anybody. Now are there some bad cops? Absolutely. But what is our problem as African-Americans? It’s the gun violence we do to ourselves. That’s what is taking us out and has our communities living in fear. ... Social media has convinced us that police are just out randomly harming people and it’s just not true.”

Rubin asked Whitlock if Democrat policies are contributing to problems in the Black communities.

I think that, yes I do prescribe to that. This far Left progressive ideology, I think, is a shell game, a trick, a mirage. We tell you we are for Black people. I wrote in the Wall Street Journal this week about how (Bill) Clinton was an expert at making Black people think he felt their pain. And he was an expert at creating policies that intensified that pain. President Clinton loved us to death, but instituted some mandatory minimum sentencing policies, some drug war policies that contributed greatly to mass incarceration, which is crippling black people.

Whitlock’s candor in this age of thought police and media cowardice is refreshing in many ways. He’s got a lot of guts for courageously standing apart from the crowd and opposing conventional thinking in television, radio and internet mediums. It’s all too rare and deserves to be applauded. We may disagree with him on some things – like the Second Amendment – but the “conservatives” we elect to Congress sometimes draw our approval and disapproval on issues as well. Whitlock is making some of our arguments for us on a large stage.