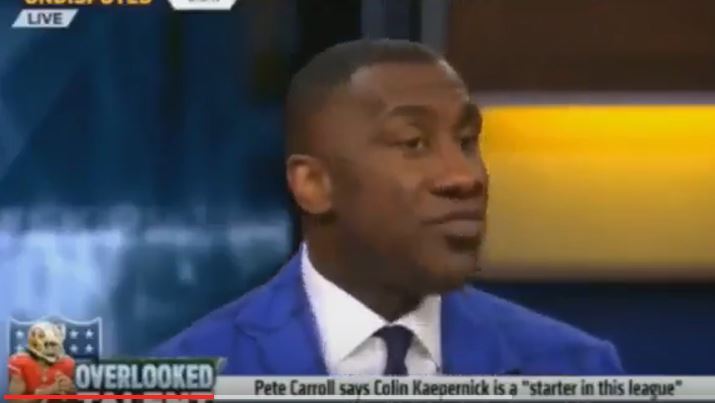 With their much hoped-for Seattle Seahawks-Colin Kaepernick dream team now reduced to dust in the wind, many in the left-stream sports media are crying unsportsmanlike conduct and some say he has a right to be on an NFL team.

Seattle is already loaded with hyper-active leftists and it appeared that by corralling the flag/cop-hating Kaepernick the Seahawks would create the greatest assortment of far Left athlete-activists ever. But their hopes were dashed.

After meeting with the Seahawks several days ago, Seattle Coach Pete Carroll announced that Kaepernick is a "starter" who will likely get a starting opportunity with another team. Then today the Seahawks followed in the wake of several other teams signing obscure backup QBs by inking the lightly regarded Austin Davis.

Shannon Sharpe, of Fox Sports 1's The Undisputed, is one of those distressed liberals. "I don’t believe they had any intentions of signing him,” he told Skip Bayless today. "For Pete to say that… Pete is being very disingenuous."

Writing in The Big Lead, Tully Corcoran said: "So this is quite a blow for Kaepernick, who is just a year older than Davis but has a much more extensive NFL resume, with 57 starts and about 14,500 total offensive yards to his name." Corcoran must be a socialist because he went on to say that some unnamed team owes Kaepernick a job:

It seems fairly clear now that Kaepernick would not be unemployed had he not made himself an activist last season. But it’s equally clear that if he could play like Cam Newton, he wouldn’t be having this problem, either. It’s fair to say Kaepernick deserves a spot in the NFL, but then you run into the problem of identifying which team, exactly, is responsible for giving it to him. (emphasis added)

David Wetzel, of Myrtle Beach Online, complained, "NFL teams collectively are wrong for allowing this guy to linger in free agency. ... It’s time someone steps up and signs Kaepernick."

The Seattle Times' Bob Condotta insisted the signing of Davis hypes speculation that Kaepernick is being blackballed. Condotta also reported that NFL reporter Mike Freeman stated: "The story that Kaepernick isn’t being signed because of his salary demands is a lie. It’s a straight up lie.'”

Condotta gave us an insight into Kaepernick's mind, too. He wrote that the polarizing activist re-tweeted a story on the blackball angle and the Freeman remark on salary. The Washington Post's Scott Allen wrote today that Kaepernick also tweeted Sharpe's remarks. Kaepernick may be growing embittered with each day's lack of contact from NFL teams. And the Seattle snub may have been the last straw.

ESPN's Will Cain: Pete Carroll saying that Kaepernick is starter quality, and that's the "reason" the Seahawks won't sign him as a backup, is total crap.

Gregg Bell, Seahawks Insider: Sure seems like Colin Kaepernick getting blackballed. These are the dots SEA left us to connect

Mike Freeman, NFL: The story that Kaepernick isn't being signed because of his salary demands is a lie. It's a straight up lie.

The Sporting News: Everybody gets to be an NFL quarterback, except Colin Kaepernick

To that I say, children may get participation trophies ... but in the big leagues you've got to earn it. And insulting millions of Americans isn't the way to do it either.