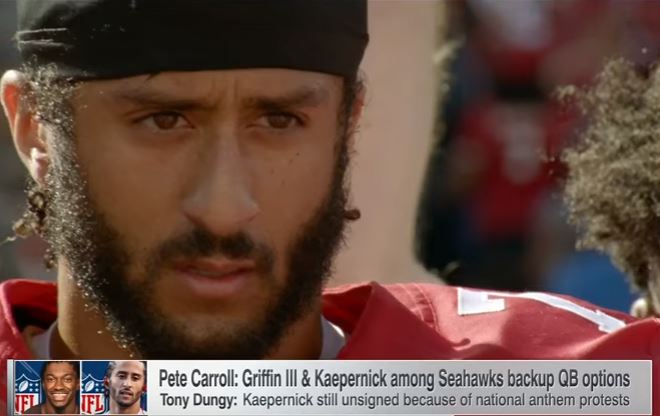 Sports media have now descended to the point where reporters are judging free agent athletes on how well they fit with potential new teams based on their activism. And judging by the strong activism among members of the Seattle Seahawks, the NFC West Division team is a good fit for radioactive activist Colin Kaepernick in the view of SB Nation's Christian D'Andrea.

News broke this week that Seattle has reached out to Kaepernick about potentially signing him as a back-up to entrenched staring quarterback Russell Wilson. It's the only interest Kaepernick has garnered since opting not to re-sign with San Francisco.

On the possibility of Kaepernick signing with the "SeaActivists," D'Andrea wrote: "Not only would Kaepernick land in a locker room where he’s surrounded by allies, but he would also join an outspoken team used to dealing with a large media presence and questions about off-field issues."

Defensive end Michael Bennett is one of the leading activists on the team. He has spoken out in favor of Palestinians and boycotted an NFL players' visit to Israel. He and teammate Richard Sherman claimed Kaepernick is being blackballed by the league for refusing to stand for the national anthem. Cliff Avril, Doug Baldwin and Jeremy Lane all supported Kaepernick's radical activism.

Wilson topped them all when he did a Facebook livestream webcast denouncing President Donald Trump and begging for the return of former President Barack Obama.

Thus, "Colin Kaepernick would have an immediate ally in Michael Bennett and the rest of the Seahawks roster," D'Andrea writes.

To drive home his point about Kaepernick fitting right in with Seattle, D'Andrea adds:

After his protests of the national anthem gained international press, Kaepernick may be the league’s most recognizable activist. Bennett, however, is not far behind. The All-Pro defensive lineman has been outspoken on issues ranging from the Israel-Palestine conflict to women’s rights to childhood obesity. He’s never shied from issues he deems important nor backed down from an argument.

Interestingly enough, D'Andrea never mentioned a word in his article about how Kaepernick would fit with the team from an athletic performance standpoint.

Former NFL Coach Tony Dungy did address what takes place on the field, however. In a Monday interview with Newsday, Dungy said: "If you’re seen as a distraction off the field, for whatever reason, you better have a lot of talent going for you. People will overlook it. They always sign talent if they think he’s going to upgrade your team."

For the past few months, Kaepernick has been working out in a New York gym with trainer Josh Hidalgo, who said, “In my eyes, this is heartbreaking. You have an individual who’s willing to take a stand for the greater good of people, and he is being punished for it. ... He is in the gym. We knew he was going to be dissected. We knew any chink in the armor was going to be dissected, so there are no chinks in the armor."

Veteran NFL writer Peter King, of the Monday Morning Quarterback, is also advocating for Seattle to sign the free agent. "I just can’t believe people are so concerned about what he does off the field. You got guys going to clubs and doing all these other things off the field. The concern is that he’s helping people? ... If everything Hildalgo says is true—and there is no reason to think otherwise—then the 31 other NFL teams passing on Kaepernick are foolish."

The question for King is this: can all the teams in the NFL be wrong about the distraction Kaepernick will bring to the table? They know that signing the guy is a blatant endorsement for hatred of public safety officers. It's hardly surprising that left-stream media only look at selective pieces of the issue surrounding Kaepernick and ignore what is highly important to many Americans.