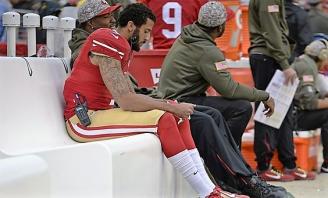 Colin Kaepernick is a free agent and the chirping of crickets is deafening amid the silence among NFL general managers. One anonymous GM, quoted by The Mercury News, suspects the lack of interest shown in the controversial quarterback stems from the fear of fan backlash or hate for the former 49er who refused to stand for the national anthem last season.

“They think there might be protests or (President) Trump will tweet about the team. I’d say that number is around 10 percent.

“(T)he rest genuinely hate him and can’t stand what he did [kneeling for the national anthem]. They want nothing to do with him. They won’t move on. They think showing no interest is a form of punishment. I think some teams also want to use Kaepernick as a cautionary tale to stop other players in the future from doing what he did.”

No matter the reasoning of the general managers, Kaepernick is learning a hard lesson. In your free agent year, you might want to think twice about showing disrespect for the symbol of freedom and the sacrifice of those who fought and died for our country. Now he’s paying the price for activism that evoked strong opposition from fans across the nation. He’s learning that NFL executives don’t appear to be among those who supported his radical stand and the distractions it brought to his team.

The Mercury News also reported Kaepernick is spending the offseason training in New York and continuing to engage in social activism.

San Francisco general manager John Lynch won't say "never" about his team re-signing Kaepernick. However, in the process of signing free agent Matt Barkley, Lynch learned there was quite a bit of interest in a younger quarterback without any excess baggage. It appeared Barkley was commanding more interest from NFL teams than was Kaepernick.