The CDC’s recent relaxing of mask mandates for vaccinated people has left many COVID doomsayers frantically wondering what to do next. After all, pesky anti-vax Trumplodytes will just lie, say they’re vaccinated and get away with not wearing masks. Thus, crazed feminist Jill Filipovic proposed a mandated Vaccine passport, a "QR code" or something, so we can know who has gotten the jab or not. 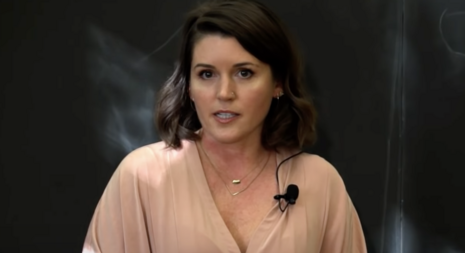 Filipovic’s totalitarian sentiments arose in response to the CDC and President Geezer removing mask mandates for vaccinated people. Of course the question as to who can tell who is vaccinated or not came about during an interview between CNN anchor Jake Tapper and Dr. Fauci. Fauci was frank in admitting that there would be no way to tell, saying, “Well, Jake, they will not be able to know. You're gonna be depending on people being honest enough to say whether they are vaccinated or not."

So much freedom, in addition to sounding weird coming from COVID control czar Fauci, bothered the heck out of Filipovic. The CNN columnist latched onto a Twitter response to Fauci’s comment which claimed that the Biden administration should push for electronic vaccine registration, and the feminist agreed with the very creepy idea.

In her own tweet, Filipovic exclaimed, “Vaccine passports (or QR codes) now!” Yeesh, these people tremble with excitement at the idea of having every citizen bagged and tagged. She added, “If you don’t want to get vaccinated, that’s your right. But it’s not your right to go to a concert, bar, restaurant, or large event.”

Vaccine passports (or QR codes) now! If you don’t want to get vaccinated, that’s your right. But it’s not your right to go to a concert, bar, restaurant, or large event. https://t.co/p4g9pGUpvr

Filipovic is correct. Private entities can ask what they want of customers, but why should she encourage businesses to discriminate against non-vaxxers? Of course all the vaxxers would be safe and non-vaxxers would only spread to other non-vaxxers. The real threat in all this is the obvious societal control mechanism, and we all know how confrontational scared people can be upon seeing people without masks.

Filipovic added a subsequent tweet targeting people who would refuse to get vaccinated based on their religious beliefs. She wrote, “Should there be health exceptions? Yes! Should there be religious exceptions? No!” Ah great, an attack on religion. So if the vaccine was made using the cells procured through an ethnic genocide, people with moral qualms about that should go to hell, so to speak? Hmmm. Sounds like Filipovic is barking up a pretty tyrannical tree.

And again, why would Filipovic need this to be the case? It’s not like vaxxed people are in danger from un-vaxxed people. And considering her contempt for the un-vaxxed “truthers” out there, does she really care that they’d be infecting each other? She said it’s their right. Who knows? Maybe vaxxed people can catch COVID again. There are reports of that. At that point we'd all have to stay indoors forever. So maybe that’s what Jill fears, but logically, it seems like she just wants to rag on people who aren’t afraid of COVID like her.