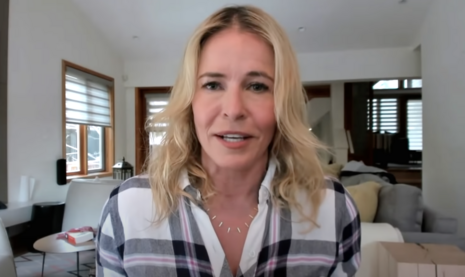 The dumbest take currently on Twitter seems to belong to comedian Chelsea Handler’s account. Though what can you expect from someone whose most sophisticated political contribution involved her removing her clothes to entice people to vote. Still it’s shocking that she recently encouraged minorities to not comply with police as there’s already a high chance they’ll get shot anyways.

In response to the fatal shooting of 20 year-old African American man Daunte Wright, at the hands of Minneapolis police, Handler did what her and her fellow Hollywood colleagues do best in the wake of tragedy and that is make a bunch of assumptions about the event and make it MUCH WORSE for everyone else.

Though people better pump the brakes on taking Handler’s latest point seriously, cause it might get them in serious trouble with the law, or worse, killed.  The woman tweeted, “Why would any person of color ever comply with a police officer when there is a 50/50 shot of getting ‘accidentally’ shot?”

Well that’s quite the attitude. Are we trying to motivate minorities to obstruct justice or resist arrest?

Hopefully not. She’s probably just making a cynical and very hyperbolic point about police brutality. But it’s a pretty irresponsible thing to say, not least because her facts are scary wrong. There is no way in hell that half of the minorities who are arrested each year are shot. According to the NAACP, there are “between 900 and 1,100 people who are shot and killed by police in the United States each year.”

Let’s compare that to the FBI's crime stats, which indicate that there were more than 10 million arrests performed in the United States in 2019, for example. Unless the amount of people shot and killed each year was multiplied 5000 times, that number wouldn’t even be remotely close to a 50% chance of getting shot. Well unless the amount of people getting shot and not dying is actually an altogether different and more massive number, but who are we kidding?

When you consider just how ridiculous Handler’s assertion is, you see the danger of this pop culture embrace of Black Lives Matter activism. The woman -- who has 8 million followers on Twitter -- has exacerbated the problem, again, to the point of it making it seem literally thousands of times worse than it is, and people believe this and are thus liable to be in grave fear of police officers.

Let’s say someone takes her point seriously. Imagine the fear going through someone’s head at the idea that there’s a good chance that the cop will gun him or her down because of their skin color. They might be so tense that there is a scuffle, and a problem that was thousands of times less likely to be strenuous is now happening because of this kind of propaganda.

Thanks, Chelsea. The problem isn’t police so much as it is the devilish propaganda coming from your Twitter account. It could get someone killed.