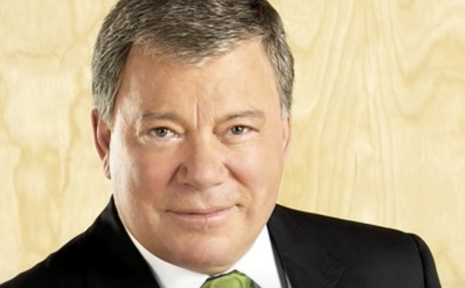 All Mr. Shatner wanted to do on August 15 was peacefully live tweet a new episode of his History Channel show, “The UnXplained.” During the premiere of the episode “The Great Imposter,” the 89-year-old actor posted what he thought was a non-controversial statement about the events described in his show to his Twitter account. Boy, was he wrong.

Shatner tweeted, “Spokane WA 1985 Billy Tipton dies and paramedics who responded discover Billy is actually a woman. She had been living as a man for decades. #TheUnXplained.” Nothing wrong with that, right? It’s an interesting and slightly unnerving bit of historical trivia.

Nuh uh. Not for the trans community. They saw woman “living as a man” in Shatner’s tweet and felt compelled to lecture him about correct transgender language even though there was no context for it whatsoever in Shatner’s line.

Brianna Wu, a leftist and failed congressional candidate, who actually has a history of letting Shatner know when his posts are politically incorrect, tore into his post the next day, quipping, “I think this is just a transgender man, William.” Oh, is it though, Miss Wu?

Shatner wasn’t having any of it and doused her critique with some serious snark that harkened back to an idiotic post from Wu’s past. “Don’t you have a catapult to set up on the moon to hurl rocks at enemy countries, dear?” Shatner replied, referencing a tweet Wu had composed in 2017 that accused SpaceX of trying to acquire the moon as a strategic military position.

Her paranoid tweet read, “The moon is probably the most tactically valuable military ground for earth. Rocks dropped from there have power of 100s of nuclear bombs.” Yes, we must watch out for Elon Musk and his company “dropping” rocks from the moon. IT’S THESE CORPORATIONS, MAAAAAN!

Not only is Wu a lunatic in that way (no pun intended) but also, what makes her think that Billy Tipton ever legitimately considered herself transgender? Sounds like Shatner’s nag is assuming genders. Shouldn’t Shatner be the one reporting her to the Wrongspeak Bureau?

Wu tried to wave off Shatner’s quip as a “tired” and immature joke. She tweeted, “I expect this horseshit from 4chan. You’re allegedly an adult man and should know better.” Oh, right. Wu is being very mature about History Channel commentary. 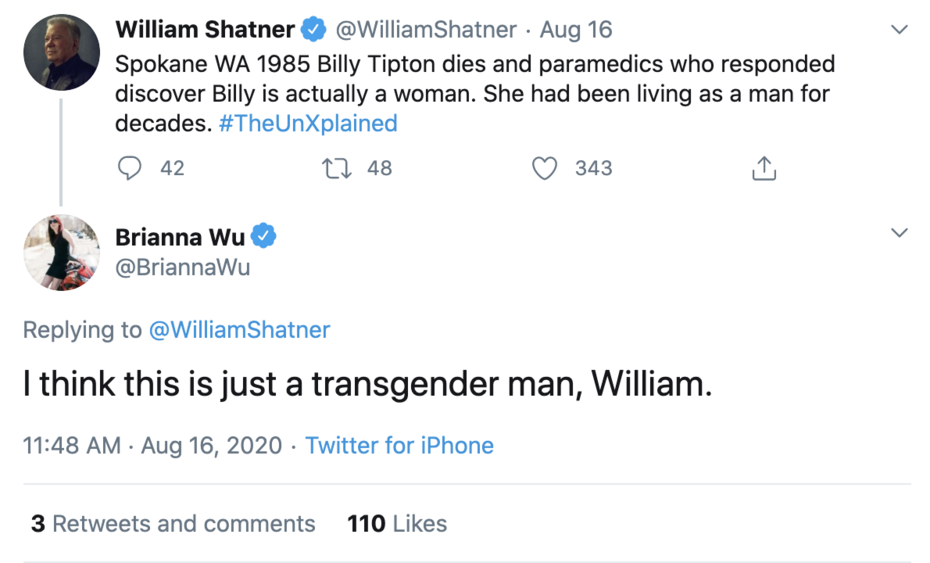 Yet another trans activist sniffed out the squabble and threw in her two cents. DC Comics author and trans woman “herself” Magdalene Visaggio went after Shatner’s commentary. She slammed Shatner’s complaint that “CIS,” (as in “cisgender”) is often used as a pejorative term towards him and criticized him for misgendering Tipton. In the now-deleted tweet, Visaggio stated, “i love how we’re talking about your feelings about the word cis and not about how you called billy tipton a woman. You’re the victim here, really.”

Shatner didn’t skip and beat and hit back at her forcefully. He explained, “I was live tweeting a show, dear and that’s a direct quote from the show. Also according to the show Billy never told his five wives that he was a woman. He said he couldn’t have sex because of a childhood accident.” See? These ladies are the ones misgendering folks.

Shatner concluded the tweet, saying, “so before attacking me, know your facts troll.” Good, he laid waste to ‘em. Now beam him up, Scotty.