GMA Skips Over Disney Star Trying to Get Natl. Guard to March Against Trump’s ‘Race War’

Former Good Morning America host and Disney Channel star Keke Palmer is being praised for video of her getting National Guardsmen to take a knee against police brutality. Though her colleagues must be so proud of her for getting these Army guys to genuflect, they edited out part of Palmer’s message that included a rant about Trump and his supporters starting a “race war.” 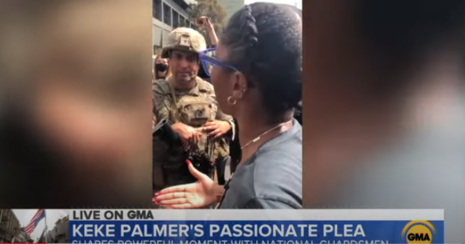 GMA’s Robin Roberts hailed Keke’s message as one of “togetherness,” but the anchor’s segment after the tense incident included a video that was cut to leave out Palmer’s divisive message aimed at stirring up fear against Trump and his supporters.

In the original clip posted to Twitter, the True Jackson VP star approached several National Guardsmen and encouraged them to stand with her against police brutality, though that meant buying into her message that President Trump had been using Twitter and promoting the “second amendment” to start a “race war.”

“‘Once the looting starts, the shooting starts?’” she asked the soldiers, questioning them on their commander-in-chief’s motives and recent controversial tweet. “You have a president talking about using the second amendment as a use for people to come out here and use firearms against the people that are protesting.”

She continued, “You have to pay attention to what’s going on… We have a president that’s trying to incite a race war, and when the borders are closed, we can’t leave.” Oh, so now Trump’s strong border rhetoric is an angle to keep everyone trapped inside during Armageddon.

Of course, Keke’s interpretation was a negligent revision of Trump’s expressed desire to prevent looting and rioting, which have resulted in the loss of even more black lives. Her account also discarded the reality that Trump had expressed sorrow and regret immediately after George Floyd’s death and ignored that he also championed peaceful protesting in the wake of what he called a “tragedy.” The former Disney Channel star needed anything to justify her outrage.

After Keke lectured the guardsmen with her baseless conspiracy theories, she encouraged them to “March beside us!” The soldiers initially protested, saying they had a job to do, but obliged when Keke and her group asked them to “take a kneel.” Still, the outspoken actress wasn’t satisfied and could be heard saying “that ain’t enough for me” as the video ended.

But GMA’s June 3 portrayal of the incident took on a different character than the divisive one posted to social media earlier. GMA host Robin Roberts introduced a portion of the clip without any of Palmer’s divisive and contentious rhetoric against the president and his supporters, only showing 20 seconds of the full 2 minute and 20 second video in which the actress urged the soldiers to “March with us!”

Of course, with some footage removed, the video could be seen as a message of unity, of “togetherness,” as Roberts described it, rather than a message painting anti-looters as anti-black and demanding that soldiers needed to leave their posts or be complicit in a “race war.”

After playing the deceptive clip, Roberts claimed that Miss Palmer is “always, always, always keepin’ it real.” Well, obviously not.