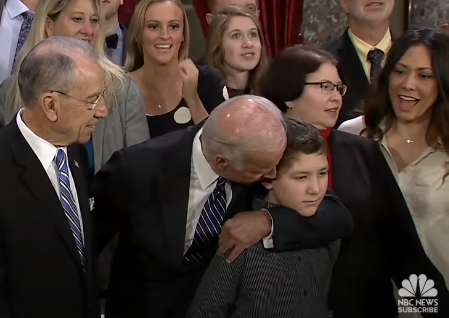 As Joe Biden marches, or rather slow crawls, to the Democratic presidential nomination, more and more #MeToo activists are finding it quite hard to ignore his sexual assault allegation and history of inappropriate touching. The only question is, why haven’t the mainstream media been as invested in these earnest women, as they were when Brett Kavanaugh was under fire?

On Friday, The Huffington Post published the distressing account of 15 assault survivors who are taking Tara Reade’s graphic allegations of sexual assault against the former Vice President “seriously.” Not only did “almost all” these women claim they thought Reade’s allegation was credible, “all of them” accused the Democratic establishment of being negligent for not talking about it.

The story seems to be gaining traction. On Friday, as well, The Intercept broke the story of “new evidence” supporting Reade’s allegation and Politico published a piece on Thursday, April 23, commenting on the problems candidate Biden poses for the #MeToo movement.

The MRC located the episode of CNN's Larry King Live alluded to by The Intercept and Scott Whitlock published it here at NewsBusters.

The #MeToo activists told Huffpost that by protecting Biden, the Democratic Party was sending them the message, “You don’t matter.”

At least on the part of the Dems’ media allies, they seem to have been sending that message for the better part of a  month. On April 13, NewsBusters reported that neither ABC, CBS, nor NBC ever mentioned Reade’s allegation that the former Vice President assaulted her in 1993 since she first revealed it on a March 25 Rolling Stone podcast. That’s a full three weeks after the allegation broke.

The double standard between this instance and the media’s coverage of allegations against conservative SCOTUS Justice Brett Kavanaugh is glaring. NewsBusters noted that within the first 12 days since Christine Blasey Ford made her flimsy allegation against the then-SCOTUS nominee, the networks devoted “305 minutes” to it.

Cable news networks ignored the Reade account, as well. On April 3, our outlet found that since the allegation, CNN, MSNBC, and NBC asked Biden a total of 55 questions and none of them were Reade-related. Only on Monday April 13 -- three weeks later -- did MSNBC decide to cover the Reade allegation, and the coverage was relegated to the tail end of MTP Daily where MSNBC host Katy Tur brought it up and then quickly switched over to President Trump’s coronavirus briefings.

Again, with Kavanaugh, CNN and MSNBC spent a total of four hours on flimsy allegations dredged up by Deborah Ramirez within the first day-and-a-half of being touted by The New York Times. “From the first report at 9:42 am Sunday through 4:00 pm ET on Monday, CNN and MSNBC have spent a combined 233 minutes (excluding teases) peddling these dubious allegations,” NewsBusters reported. What’s more is that Ramirez’s accusations fell apart completely after modest scrutiny.

The double standard provides evidence that perhaps #MeToo issues are a huge priority to Democrats and their media allies when it’s politically expedient for them. When it’s inconvenient for their presumptive presidential nominee, perhaps they “don’t matter.”