‘Ellen’ Producer Gets Trump-TRIGGERED: ‘I Hate Him,’ ‘Hundreds of Thousands Gonna Die’

Don’t be fooled. Though Ellen Degeneres may be the pleasant, smiling face of popular daytime talk show Ellen, some of the people calling the shots behind the scenes aren’t quite as jovial and happy-go-lucky as their brand pays them to appear. 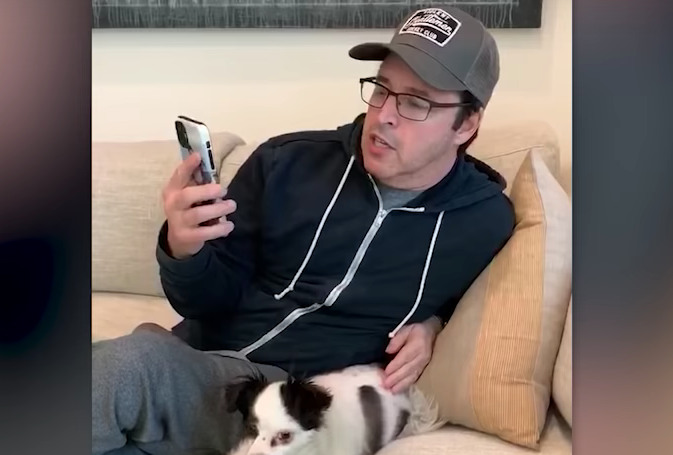 Though he tries to toe the well-adjusted, normal guy line for the sake of his career, Ellen executive producer Andy Lassner turns into a quaking, rage-filled troll every time President Trump tweets. It happens all the time, although he went a little far in the last few days, saying that “hundreds of thousands of Americans are gonna die because he’s an evil, dangerous and narcissistic motherfucker.”

Come on, Andy, a tad extreme?

On Tuesday, Mar. 31 Lassner was obviously bothered by President Trump’s handling of the coronavirus pandemic. Impeachment failed, so rabid Trump-haters are trying to hang the fallout from a natural disaster on him.

Yep, according to the rest of the tweet, “Now, hundreds of thousands of Americans are gonna die because he’s an evil, dangerous and narcissistic motherfucker.”

It would make more sense to accuse Trump of this because of stupidity or incompetence, but Lassner claims it was “evil.” Well, maybe it could be “evil” if Trump was somehow stalling to keep the 6.6 million people who lost their jobs in the past week on payroll for the sake of his re-election, but wouldn’t him ultimately shutting down the whole economy defeat that motive? Yeah, so that being that stupid, the only option would be mean Lassner’s calling Trump a murderer.

Then again we are giving the Ellen producer too much of the benefit of the doubt by assuming he’s rational. A day later he admitted that he “hates” the president, and he doesn’t hate anyone.

On Apr. 1, he responded to a video of Trump touting his success on social media support and Lassner let it out. “I’m sorry. I hate nobody. But, I hate him.” There it is. He’s triggered.

Comedian and actress Nicole Arbour slammed Lassner for his hateful comments. She retweeted his “hundreds of thousands of Americans are gonna die” post and captioned it, writing, “Well... this is the Exec Producer of @TheEllenShow where the theme is kindness unless you support the President than FU.” A perfect summary, Nicole. Thank you! 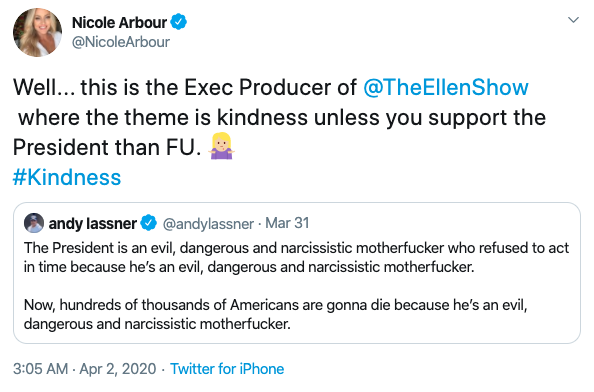 Lassner’s just driven by blind rage. If Trump was such a joke to these folks, why are they so offended by him quipping about his Facebook following? Lassner will probably tell you that it’s because Trump isn’t taking the job seriously. But really Andy? You show no respect or knowledge of the office by passing off the assertion that it gets away killing its own citizens.

Perhaps it’s because Trump’s not a spineless liberal who is also adept at using media. It seems that being a "narcissistic motherfucker" gets you almost as many followers as @TheEllenShow, on Twitter anyway. Perhaps Lassner could produce for Trump. I hear it’s a good gig.