Guardians of The Galaxy star and former WWE wrestler Dave Bautista is trying to impress his media and Hollywood friends by putting President Trump in a political half-nelson. The actor hopped on social media to torch Trump for supposedly botching the government’s response to the pandemic. 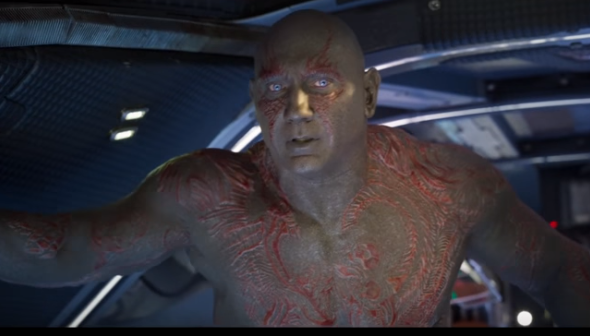 Bautista, who has also appeared in films like Blade Runner 2049 and Stuber, pulled none of his punches with his criticisms about “President Dumb Dumb” and “brain dead moron” supporters. Judging by the sophistication of these insults, you can really tell wrestling was his true calling.

His anti-Trump screed began on Thursday, March 26, and began with the wrestler-turned actor tweeting out a Joe Biden ad bashing the president over the pandemic. Bautista captioned the video, writing, “For the record I’m a @SenSanders supporter but this message is too important not to rt.” Ok, Sanders? Pretty dumb but not completely unhinged … yet.

A Sanders supporter replied to Dave’s post with some half-baked reference to Back to The Future and how Bernie Sanders was the “Marty McFly” to Donald Trump’s “Biff,” the oafish bully who terrorizes McFly throughout the series. Bautista loved that.

He tweeted, “We’ve all had too much of Biff’s shit! Except the brain dead morons who continue to support him without a logical thought in their minds of why they actually support him. Anyway... don’t get me started on President Dumb-Dumb.”

Bautista didn’t stop with his vendetta against the president, bringing back his “Dumb Dumb” insult for another round in the ring. Retweeting a video of the president’s press conference, the muscle-bound actor wrote, “Hey President Dumb-Dumb @realDonaldTrump you’re such a piece of [shit].”

Perhaps Bautista wanted Trump’s attention because he kept tweeting his lame-brain rebukes. He waded into Trump’s feud with state governors, tweeting, “the Gov of Washington is asking the fed govt for help but you [Trump] won't return his calls because he’s unappreciative of your efforts? So basically fuck every American citizen in Washington because the Gov. hurt your feelings?”

Again, Trump clarified at the press conference that regardless of personal beef, work was getting done and that Vice President Pence had talked to Washington’s governor, but then again, Bautista’s probably too “dumb dumb” to have picked up on that.

And for good measure, Bautista threw one last tweet Trump’s way calling him a “misogynist asshole.” Bautista tweeted, “P.S. President Dumb-Dumb can you stop being a misogynist asshole for one goddamn minute. You’re such a disgrace @realDonaldTrump ... how the fuck are you our president?!!!”

Though the real news is, Dave knows how to use 4-syllable words like misogynist. Wow! Keep it up, Mr. Bautista. Maybe you’ll be a less expendable villain in the next Bond movie.