Taking a play out of Kathy Griffin’s playbook, the latest Cannes Film Festival entry is all about insane feminism; feminism for whom true power lies only in decapitating President Donald Trump and holding his bloody head aloft. Geez, we get it. They hate Trump. But even the Hollyweirdos need to admit that this trope is a little tired. 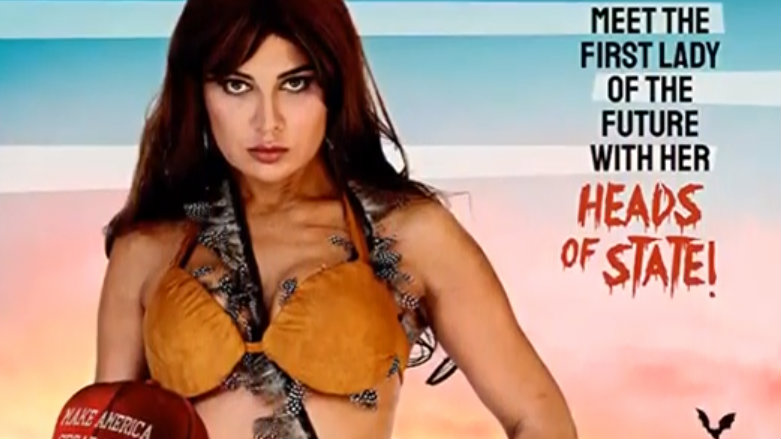 Well you know they don’t care. In Hollywood honor is all about running roughshod over conservative values, and being derided for it is equivalent to a earning medal for bravery. That must have been what inspired the latest grisly anti-Trump art piece called, “When Women Rule the World.”

Debuting at the 2019 Cannes Film Festival, “When Women Rule The World” is the latest work from “internationally accomplished” director Sheldon Silverstein. The film aims to be a “high-concept, sci-fi satire with sociopolitical themes that align with movements like #MeToo and Time’s Up and contain storylines that comment on toxic masculinity.” Wow, can you cram any more fashionable grievances into one pretentious flick? But the pretension doesn’t extend to marketing the movie; if you look at the film’s poster, you can tell it’s just typical lowest common denominator Trump hatred.

The film’s poster evokes old-timey B movies, featuring a Raquel Welch-esque woman in a barbarian bikini of sorts. The kicker here is that the gal is holding two severed heads she’s apparently acquired in her “#MeToo” conquest, one of them being a zombified-looking effigy of President Trump, complete with MAGA cap and lots of blood.

It reads, “Meet the First Lady of the Future With Her Heads of State.” The writer/producer/director told The Hollywood Reporter about one of the “key plot points” of the film: “Donald Trump gets in a fight with Putin over who has the biggest penis, and he pushes a button that starts World War III … It’s kind of crazy.” Yeah, if we’re going for the literal crazy that Trump Derangement Syndrome seems to generate.

The movie’s setting involves main characters being transported to a post apocalyptic desert world after Trump has dropped the bomb. Yet here we are, two and a half years after the “button” should have been pressed, and still Silverstein believes that is movie is tapping into a compelling societal “consciousness.” He claimed, “the film has a consciousness and has something to say about what’s going on in the world… [Trump’s] a moron and doesn’t care about the environment. It’s all about money to him.”