From the Feb. 28 Washington Post comes a useful reminder that in Progressive Land the sky is always falling; the cause just depends on which Chicken Little is doing the screaming. Or when. 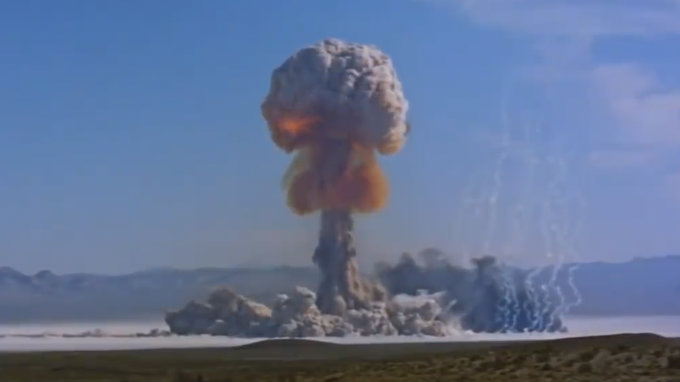 Novelist, transgender activist, and trans woman herself, Charlie Jane Anders dredged up some old, blast-from-the past Cold War-era fears in a Post op-ed, complaining about the fact that “pop culture has more or less stopped warning us of the dangers of atomic devastation — and that’s too bad.”

Anders is going to have to get in line. Maybe come back after lunch. We’re grappling with climate doom just now. Why worry about bombs when the world is going to end in “12 years?”

This isn’t paranoia, it’s liberal politicking. Here’s just another case of cynical progressives trying to stoke fear to get their way. Andres cited all manner of insane, out-of-touch examples to argue for pop-culture’s return to that The Day After mentality. She wrote, “The Bulletin of Atomic Scientist Doomsday Clock at two minutes to midnight in January 2018, making this our closest call since the 1950s,” and that certain nuclear non-proliferation studies say the current “risks are increasingly multipolar.”

So we’re supposed to lose sleep over that cardboard clock?

But you forget who’s president. Threats “include the Trump administration’s more aggressive nuclear posture review; the abandonment of key arms treaties with Russia and Iran… and the weakening of the international institutions such as the United Nations.” Sounds like WashPo op-ed writers don’t like the abandonment of the Obama-era status quo.

Nuclear fears are nowhere near a level when we were actually in conflict with Russia during the cold war and North Korea has paused missile tests, during the Trump administration no less. With regards to Russia and Iran: aren’t we safer abandoning deals that are no longer relevant, or were no more than wishful thinking to begin with? Get screwed over?

Anders should re-prioritize. There’s a much bigger heebeegeebees market in the climate change fight. She can keep all her hyperbolic language, and can even set a doomsday clock for 12 years or whatever this week’s magic number is. Post a picture of it and wait for the Ocasio-Cortez retweet.

It’s just the same game. De-proliferation activists and environmentalists always have some new schtick to get people second guessing about America’s mission in the world, and take their anger out on people who see past it. But we can only handle so much fear and shame at once. Sure, Trump’s Twitter finger on the nuke button is a chilling thought, but those Double-Cataclysm Burgers fat Americans are scarfing down will flood Miami and kill 7 billion people!

If Nuclear Freeze Activist Al Gore had been right or truthful in the 1980s (yes -- some people just can’t get enough apocalypse), there would have been no Global Warming Prophet Al Gore to be wrong and dishonest in the 2000s. But Ronald Reagan was right and Antarctica is still a solid.

But the left runs on resentment and fear. In 2018, you were an idiot because you didn’t believe scientists who said we only had “20 Years Before There’s No Turning Back,” and now you’re even dumber and more guilty because you won’t adjust your life when Ocasio-Cortez and Green New Deal proponents cry that, only one year later, we only have a dozen years left. Consider that any day now Mike Pence will open his archipelago of gay concentration camps and that we’re just a SCOTUS ruling away from The Handmaid's Tale, and you have enough bad feeling to power the Democratic party for years.

Anders will have to wait until Wheel of Doom turns again.