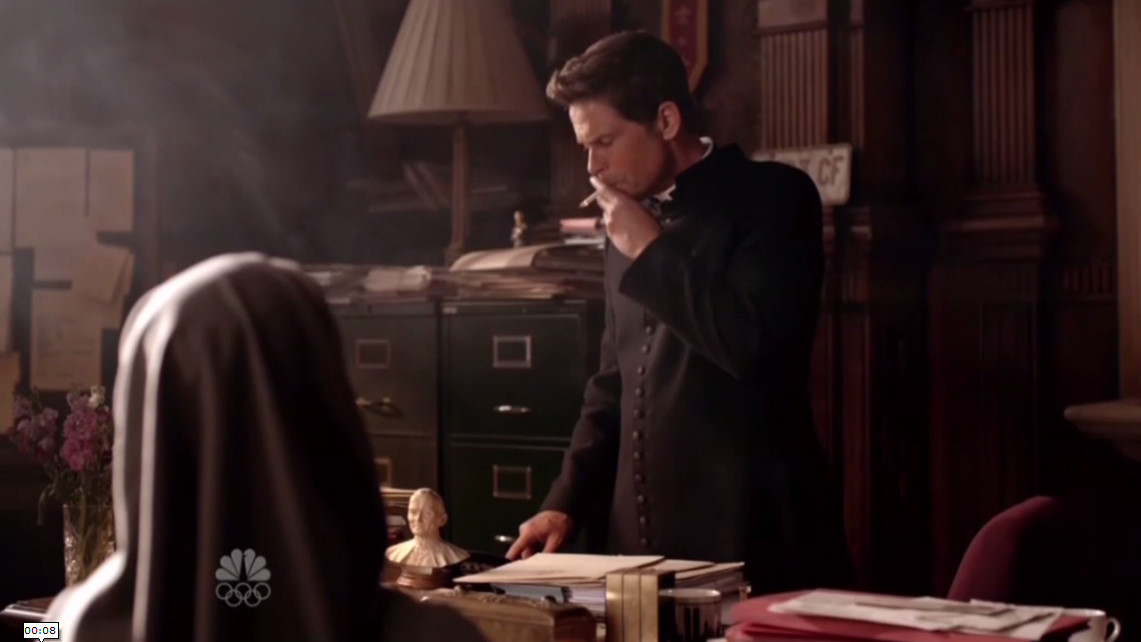 NBC’s You, Me and the Apocalypse centers around an eclectic cast of characters as they receive the news that a comet will hit the Earth in 34 days, ending all life on the planet. Rob Lowe stars as the chain-smoking, foulmouthed Father Jude, the Vatican’s newly re-empowered “Devil’s Advocate.”

The Devil’s Advocate, or Promotor Fidei, is supposed to protect the Church by ensuring potential saints lived virtuous lives. Before canonization, the life of a candidate is thoroughly investigated. Among other requirements, at least two verified miracles must be attributed to the deceased. Father Jude’s job is to undermine these claims, or as he succinctly explains, “My job's to prove they felt up kids and parked in the handicapped spaces.”

Jude describes himself as the “ecclesiastical turd in the swimming pool.” It’s an apt description for his antics. He could be forgiven for his cynicism and rampant tobacco usage—in my personal experience, smoking isn’t uncommon among monks or priests—but using a holy water font as an ashtray is wholly out of step with the character he is supposed to portray. No Catholic clergyman would be so disrespectful, especially not one with an office in Vatican City.

Father Jude’s constant swearing and crude language is equally out of place. It’s hard to imagine this person would so casually disregard one of the Ten Commandments in his own daily routine.

Father Jude: Pricks! Who the hell are you?

Father Jude: I meant my potty mouth - my swearing. Did it offend you?

Sister Celine: It surprised me a little but, no, it does not offend.

Father Jude: Let me ask you, do you find the phrase "Christ on a bike" offensive? Because I just used it in a meeting and you would have thought that I'd performed an abortion on the table or something.

Sister Celine: Well, I suppose the image of Christ riding a bicycle could seem a little bit disrespectful.

Father Jude: Really? Because I think he'd be very likely to ride a bike. He seems like that kind of a guy to me. I mean, what else would he show up in, a stretch Hummer? No, it's not here. Father Alphonse, could you please bring in Sister Celine's file?

When he finally gets Sister Celine’s (Gaia Scodellaro) file, Father Jude immediately sets his sights on her character. He gleefully notes how she “used to be fat” and probably regrets joining the convent now that she has a head-turning figure. By the end of the interview, Sister Celine has been brought to tears and angrily fires back at him that he’s a douchebag. When another priest gasps at that she says to him, "Oh, get back in your closet!"

It will be interesting to see how Father Jude’s character develops, Rob Lowe is known to often be right of center after all, but I don’t have high hopes. At the end of the episode, with the world’s end in sight, Sister Celine agrees to work as Father Jude’s research assistant. We’ll have to wait to see whether NBC takes anyone of faith seriously, or if they’re all portrayed as superstitious foulmouthed crackpots.