If you like country music, you’re probably an anti-gay bigot. That was the message of last night’s episode of ABC’s country music-themed drama, Nashville. Songwriter Will Lexington (Chris Carmack) is shocked that Wade Cole (Josh Coxx) chose to feature his song on Cole's upcoming album, given his sexual orientation. He can’t comprehend why an outwardly religious singer might want to work with a gay songwriter. Cole explains, he's fine with it, but it's his fans (and his wife's pro-family organization) that have the problem.

Cole: Listen, I appreciate you meeting me out here. Usually like to write out at the house, but wife's got renovations going on, kids are off school this week.

Lexington: Yeah, it's not a problem.

Cole: So, uh, let's talk about your song.

Lexington: Yeah, I was actually surprised you put a hold on it. I wasn't sure you were too comfortable with me.

Cole: What do you mean?

Lexington: Well, you know, the, uh... Launch party? The way you made sure that photographer didn't get a picture of the two of us together?

Cole: I'm not gonna lie. You've chosen a lifestyle that most of my fans have trouble with. Frankly, my wife does, too. She's got this big charity of hers, and most of her donors wouldn't like seeing me with someone... It'd be an endorsement -- that's how they'd see it anyway -- of something they don't approve of.

Lexington: Guess I can see that.

Cole: Personally, I don't have a problem with it, but at the end of the day, I got to answer to the missus.

Just in case you couldn’t figure out the real reason Cole didn’t invite Lexington to write at his house,  Nashville delivers a scene where Lexington finds out that Cole was a supporter of Prop 8. Never mind that Proposition 8 was supported by a majority of Californians in 2008, Hollywood is still seeking vengeance and continues trying to hound supporters out of polite society. 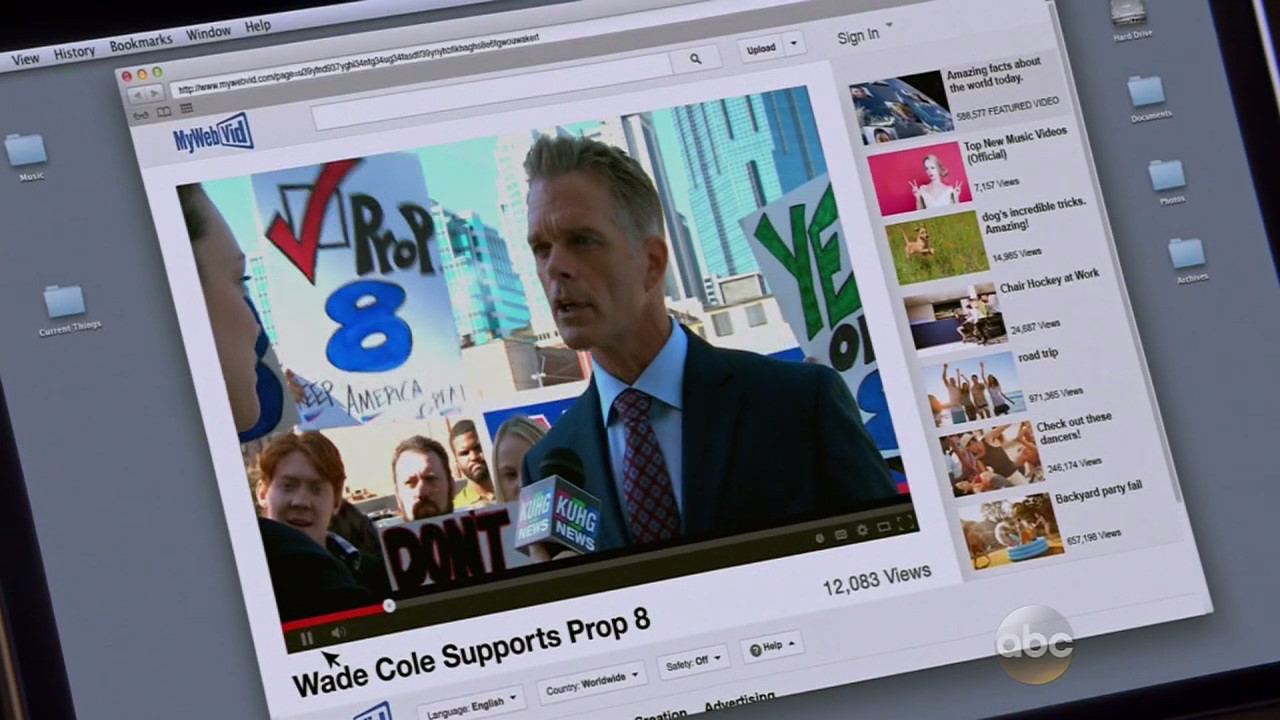 The show circles back and lets Lexington rant. According to the songwriter, if you support traditional marriage, you obviously want to round up homosexuals and exile them from the country:

Lexington: Wade Cole is worse than a bigot -- he's a hypocrite. His wife runs one of those, um... "Traditional value"-type organizations that wants to round up anyone they disapprove of, stick us on an island somewhere. I mean, my publisher says I'm a fool if I say "No," but I can't work with the guy.

Back in the real world, I doubt the average music fan can tell you the name of the songwriter who penned their favorite artist’s latest anthem, much less his sexual orientation. Most of them are probably more concerned with the music.

To paraphrase Laura Ingraham, shut up and write!