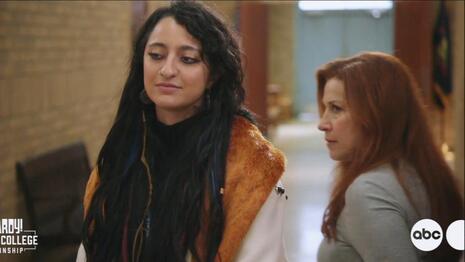 Janine and her fellow second-grade teacher, Melissa (Lisa Ann Walter), are excited about their yearly Peter Rabbit project with the kids. Every year, the second graders create styrofoam plate bunnies in coordination with the art teacher.

This year, Melissa, a tough-talking middle-aged woman from South Philly, has bought 75 beautiful new copies of the book with her own money for the kids. (In the series, the school's incompetent administrator has been shown wasting taxpayer money, but the teachers themselves spend from their own pocket for extras in the classroom.)

Sahar immediately tells Janine that she is concerned that Peter Rabbit is not a "relevant" enough book. Sahar only accepts the choice after thinking about it on a "metaphorical" level.

"I mean, most people just think of it as this story about a rabbit who steals carrots. But we're not like most people," Sahar tells Janine. "We see subtext. It's a story about domesticity and capitalism."

Sweet Janine looks worried but smiles along, because she does not want to upset her "cool" bohemian friend. Ultimately, Sahar has the children make the adorable styrofoam bunnies. Unfortunately, she also tears up the 75 copies of Peter Rabbit that Melissa purchased and uses the paper from it to create an art installation in the library.

Melissa is infuriated about Sahar destroying the books, and Janine is shocked by her friend's actions. Sahar then criticizes the idea of using the classic children's book at all, saying it is "outdated" and lacks "bunnies of color."

Sahar: Why are you reacting this way? The project was gorgeous.

Janine: Sahar, you ruined the books she bought. Mm-hmm.

Sahar: You all don't understand. The whole project was about pushing boundaries.

Melissa: How about I push the boundaries of your head with this book?! No! Alright. [ Exhales sharply ]

Janine: Sahar, this project was about the kids practicing their fine motor skills in a creative way. You took this way too far.

Sahar: There's no such thing. And we can just get more books. It's not hard.

Janine: It is hard, actually.

Sahar: Then I'll use some of my money to create a personal grant so that the school can get more relevant books than "Peter Rabbit."

Janine: What is your problem with "Peter Rabbit?"

Sahar: It's just been done.

Janine: It's done for a reason.

Sahar: Are there even any bunnies of color in it?

Janine: The kids like it, okay? Just because a bunch of people like something doesn't make it bad.

Sahar: Wow. I knew it. I knew you were one of them.

Janine: One of who?

Sahar: A conductor of mediocrity and conformity. You know, I thought it was so cool that you worked in an underprivileged school, but now I see that you don't even care about inspiring the kids. You know what? I hate to say it, but I think you're a conventional thinker.

Janine: You know what? You can get out.

It's Sahar, of course, who's the real "conductor of mediocrity and conformity," mindlessly regurgitating woke ideology. Janine and Melissa are trying to help their students learn in practical ways.

In order to get money to buy new books for Melissa, Janine sells the art installation in the library to a group of woke commie artists.

Janine: I obviously could not afford to buy the books myself, so I had to get creative. So, what you see here is a commentary on both domesticity and capitalism. Uh, as well as socialism and sexism. If you think about it for a second, carrot...or not, it's up to the eye of the beholder of the person who has the eye. I reached out to some art collectors who notoriously have money to burn. I sold the art installation and had enough money to replace the books.

Abbott Elementary has been one of ABC's few sitcom hits in recent memory. Sitcoms are dying, and the mockumentary form of it has almost completely disappeared. But, the success of this new show proves it can still endure with good writing that does not insult or lecture its audience.

Take a moment to be part of the solution by contacting the advertisers and thank them for supporting the truth: Quaker Oats, Claritin and Downy.