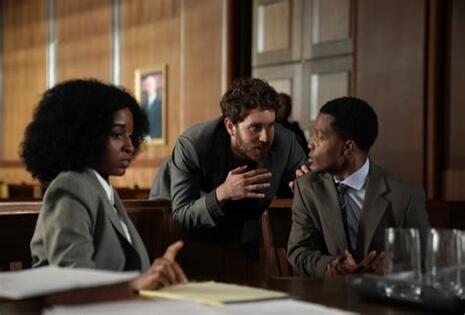 A rare television show premiered this week that dared to use the phrase "woke bullshit" when portraying the current cultural moment.

On Thursday, September 16, FX on Hulu premiered the new anthology series The Premise created by B.J. Novak of The Office fame. The series refuses to be pigeon-holed into easily definable categories, sometimes promoting the leftist line and other times skewering it.

The first episode, "Social Justice Sex Tape," does rely on the offensive anti-police narrative that is now a standard part of BLM-era scripts, but it also satirizes the cruelty and hypocrisy of contemporary social justice.

In the comedic, over-the-top episode, an innocent black man named Darren (Jermaine Fowler) is wrongfully accused of assaulting a police officer. The twist is that a twenty-something woke white man, Ethan Streiber (Ben Platt), has a homemade sex tape with his ex-girlfriend that can prove the officer lied. Through the window in the background of his tape, it shows that the police officer tripped and injured himself while the black man's hands were up.

Streiber, who majored in creative writing at Middlebury College, likes to talk about how he is an ally to black people. "Look I protest, I donate, I march regularly. I really do believe in my bones that black lives matter," he tells the black female attorneys representing Darren.

Streiber is also a beta-like buffoon whose ex-girlfriends resent him for being selfish and comically clueless in the bedroom, as shown on the tape. The particular ex-girlfriend in the voluntary sex tape uses her time on the stand during the defendant's trial to attack "how our society gaslights insecure young women that they should be with white men who have nothing to offer them but unearned status, privilege and arrogance."

The prosecution, after looking through his 10,000 tweets, points out that Streiber behaves like a hypocritical fraud on social media: "This one calls for abolishing the police. This one calls for more law enforcement at a Tame Impala show. 'Never trust the government.' 'Never trust the pharmaceutical industry' and then 'The government is doing an amazing job rolling out the vaccine. You're an idiot if you don't get it.'"

The defense counsel illegally leaks the sex tape to the media to gain national attention for the case, publicly humiliating Streiber far outside the courtroom. In a final courtroom moment, Streiber expresses frustration at his inability to satisfy the woke gods and how eager everyone is to score points by destroying his life, including his supposed allies.

Streiber: You know what? All I wanted to do is help, okay? And everybody is just - everybody is just making it impossible. Okay. Everybody is dragging me for not being a perfect person. I've really done everything I can think of to do. Okay. I posted that black square, I deleted that black square, I reposted the black square, and then I redeleted the black square. And literally nothing is ever enough. Okay. And everyone on all sides is just destroying me to show how good they are. Well, how am I supposed to get a job after this? Hm? You ever thought of that? How am I ever going to get a date after this? Do you realize how deeply fucked up this is for me.

Streiber: No, no, no, no. This system is fucked up. Okay. You know what, actually, actually, both systems are fucked up. The justice system wants to fuck people like Darren and the social justice system wants to fuck people like me. And I'm not perfect. Did I ever say that I was perfect? I am so deeply fucked up in a myriad of fucked up ways just like everybody fucking in this room is, right. But I try so hard. I really try all the time to do the right thing, but it seems like the harder I try the more I just get incessantly shit on. So forget it. Okay. I quit, it's all over, fuck this court, fuck this system and fuck this woke bullshit!

After his exoneration, Darren thanks everybody but Streiber for helping him to gain his freedom. Instead, he takes time in his thank you speech to make fun of Streiber's clownish sexual performance on the tape.

"You said I'd be a hero for this," Streiber tells the defense lawyer. "I didn't say you'd look like one," she replies. His life is ruined, but the national destruction of his reputation is irrelevant to those around him. He is disposable. He spent much of his young life feeding the woke crocodile that says he is worthless as a white "privileged" male. As the episode closes, the crocodile has eaten him and spit him out.