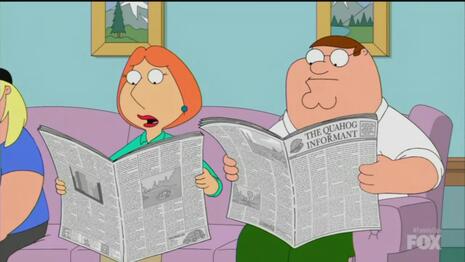 The episode not only fantasized about the imprisonment and death of Trump. It also imagined the death of Trump's beautiful wife Melania and Vice President Pence, making "jokes" about all of them committing suicide in prison.

The show opened with the Griffins reading newspapers as Peter announced Trump's death.

Peter: "God, can you believe Trump hung himself in prison?" (We wrote this in February 2019. Were we right?")

Later, Brian is reading the newspaper and says, "God, I can't believe Mike Pence came out of the closet just before he hung himself in prison." Words on the screen read, "Again, we wrote this in February 2019. Did we nail it?"

Finally, when Quagmire is reading the newspaper he says -- you guessed it -- "God, I can't believe Melania was deported to Slovenia and then hung herself in a European prison." Then words over the screen read, "Okay, now we're done."

So since at least early 2019 Family Guy writers have been laughing at the idea of the President, Vice President and First Lady all committing suicide in prison. The left's raw hatred for our duly elected president, his family and his cabinet has been relentless and exhausting since November of 2016. Imagine what would have happened if television had made such "jokes" about Barack and Michelle Obama.

The left never ceases to make clear that they wish death on Trump and those who work with him or stand by him. Their rage against the president and his supporters is sick.

This rant was brought to viewers by AT&T and Old Navy. You can fight back by letting these advertisers know what you think of them sponsoring such content.