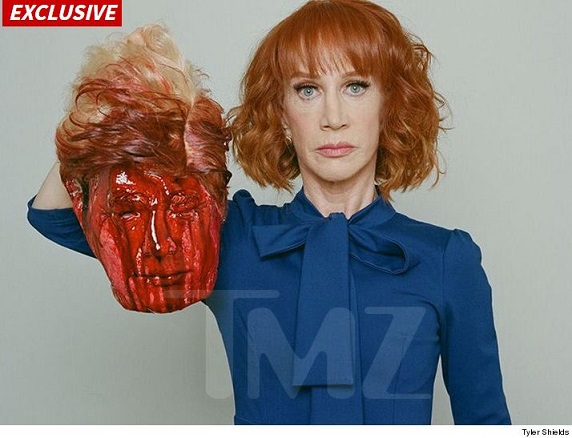 In a photo shoot leaked on Tuesday afternoon by TMZ, far-left lewd comedian Kathy Griffin posed with a bloodied, fake severed head of President Donald Trump in the same vein ISIS fighters would in videos showing the beheading of their prisoners.

Whether it’s making oral sex references in 2008, kissing Cooper’s crotch moments into 2013, stripping down to lingerie in 2015, or inviting Megan Mullally and Nick Offerman to have sex with her during the most recent installment, CNN’s dislike of the ratings-driven President is rather hypocritical.

It’s obvious that CNN isn’t a fan of President Trump as full-fledged cheerleaders of The Resistance, but it’s fair to say that this goes too far.

Care to comment on this, CNN Public Relations? How about you, CNN Media team? Will you pressure your own network to drop Griffin following this photo shoot depicting a beheaded President?

One will think they’d comment, but nothing is really surprising anymore. However, it’s a safe bet all of these groups would if Griffin had done this with a fake Obama head.

During the 2016 presidential election, Griffin had a few desperate screams for attention that drew eyeballs. Griffin appeared on PBS in November 2015 and told host Tavis Smiley that there was no way she would let then-GOP candidate Dr. Ben Carson “give me a pap smear.”

Griffin appeared in a series of October 2016 YouTube videos in which she seized on a line Michelle Obama used about “when they go low, we go high” to instead inform viewers that “when [Trump] goes low, I go lower.” One could go on and on, but it’s best to be judicious with the attention she receives.

Early in the hours of March 1, Griffin joined MSNBC and a sleepy Chris Matthews following Trump’s Joint Address to Congress, telling his measly viewership that Trump and his entire ship were “going to go down” in the impeachment flames.

She also linked the President to drug addicts:

Editor's Note: This post has been updated to include more instances of Griffin's chicanery on CNN and some of her statements during and after the 2016 election.