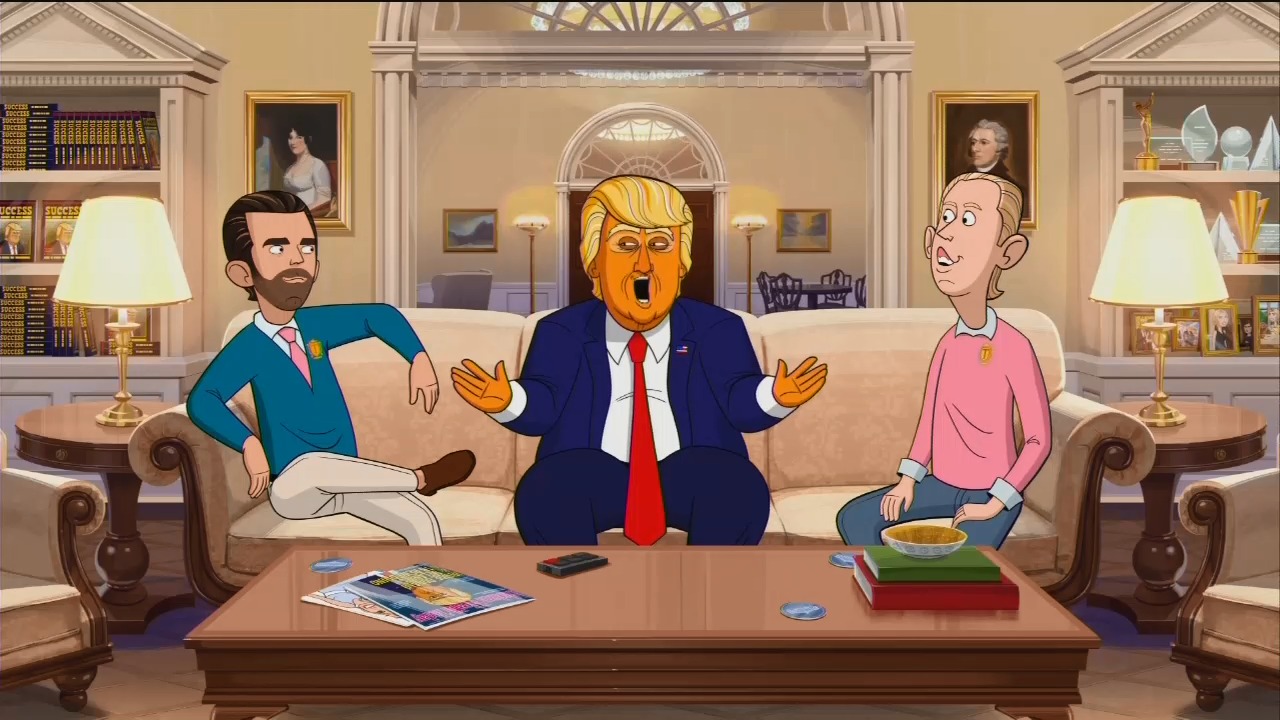 Leftists are delusional and they hate America's founding fathers. That was reiterated in this week's episode of Stephen Colbert's unwatchable Showtime cartoon, Our Cartoon President (Colbert is not original with titles). The first two episodes of this season jumped on the impeachment bandwagon and fantasized about the American economy crashing.

In this week's episode, "Election Security," on February 9, the show continued to rehash the Russia collusion delusion and insulted the founding fathers as inherently corrupt men who created a rigged system.

The show at first began promisingly by acknowledging the fiasco of the Iowa caucus. It opened with Democratic presidential candidates discussing the Iowa results. Bernie Sanders said, "Whoa, whoa! They rigged this thing against me. What a shock." But the show soon segued into the usual left-wing conspiracy theories about Trump colluding with Russia to win in 2016 and cheating again to win in 2020.

Anderson Cooper: Nancy Pelosi and Chuck Schumer have vowed to pass a bill that strengthens election security
beyond the single download of Norton Antivirus being shared among all 50 states.

Donald Trump: Go, Russia, go! Kids, I think this election's in the bag.

Eric: I hope so. If you lose and go to jail, who will look after me and my wife and kids?

Don Jr.: Are you high, Dad? Your poll numbers eat ass. If you don't cheat big time, never again shall the scrotum-vein bursting victory cheers of 2016 land upon thy ears.

Donald Trump: Ah, the only thing better than the cheers were the tears. Everyone was watching Fox News, but I was glued to the other guys. That was the real victory: Watching all those people fall apart at the seams for underestimating my DiCaprio-like charisma. I don't need to cheat. I'll just run on my sterling record of saying and doing whatever.

The truth is Donald Trump's poll numbers are actually high right now. Even CNN has had to admit he recently had some of the best polling news of his presidency. The notion that he would have to cheat in 2020 because of lousy polls could only be believed by somebody living in a bubble.

Later, Donald Trump, Jr. advised his father to rely on "the foreign guys."

"It's just I was already impeached for my perfect call with Ukraine," Trump replies.

"Then they'd never suspect you could be that stupid to collude again, again. Prove to them you're that stupid, Dad. If things get rough, you can always call that Russian lady lawyer I tried to collude with," says Donald, Jr.

"Okay, Don. I'll collude with the Russians again, and I'll make sure this election is as insecure as Chris Christie at a pool party!" Trump concludes.

The way liberals and Democrats have tried to convince the world that the 2016 election was "stolen" by the Russians has been one of the most twisted attempts to undermine the republic in my lifetime. Leftists will never accept their loss and may push the Russia hoax for generations. It's pathetic.

While that subplot was in full force, Senator Mitch McConnell tried to create a bill clearly designed to steal the election, but Trump felt bad because the cheat was too transparent. He talks to a statue of George Washington. The dialogue that ensues is one of the most offensive moments in the show.

George Washington: I know you're reading from Wikipedia.

Donald Trump: I guess you're angry that I'm trying to deny millions of Democrats their right to vote.

George Washington: On the contrary, we founded this country with the intention of limiting voter turnout to no more than could fit in a single barn.  I was elevated to the presidency by an electorate consisting of two dozen landowners and one alleged libidinous deviant named Ben Franklin.

George Washington: But we concealed this imbalance of power by weaving into our Constitution a great tapestry of rules, tricking the common man into believing all was fair. That tapestry is shredded by Sir McConnell's bill.

Donald Trump: But if I don't sign that bill, I'll lose.

George Washington: Sign that bill and your victory will be a hollow one. Don't sign, and you may risk defeat unless you try winning the American way: By searching the Constitution for ways to let as few non-white people vote as possible. The choice is yours.

Is this how the left really sees our nation? To them, is it just a country founded by "libidinous" deviants who tried to limit votes? Do they know nothing of history and the extraordinary nature of the American experiment in the eighteenth century?  Instead, leftists envision the American way as nothing more than trying to "let as few non-white people vote as possible."

In the end, Trump comes up with a new bill with more euphemistic language that restricts voting rights. Trump proudly tells his sons, "Big ups to the Founding Fathers, boys. They made it so guys like us can gaslight the public into thinking elections aren't rigged against them."

Never forget: Leftists hate our country, its founders and its founding documents. And they rewrite and reinterpret history in ways that teach others to hate the United States as much as they do. If they lose in 2020, they will again do everything they can to convince the world it was all rigged rather than the obvious failure of their own party and lousy candidate.