USA Today Sports wants you to know that they believe it’s very important that everyone has a right to say whatever it is they believe. Right before they accuse you of causing transgender people to commit suicide because of your beliefs.

In an article titled, “Curt Schilling Can’t Stop Sharing Ignorant, Insensitive Material on Social Media” (you know, just in case you were under any illusion that this article would be the least bit objective), USA Today took Schilling to task for his recent Facebook post, and comments regarding the North Carolina Transgender bathroom law:

“With debate raging over a controversial and sweeping anti-LGBT law in North Carolina, who would have guessed that MLB pitcher turned ESPN personality Curt Schilling would weigh in? You? Well, you’re right.

Here’s something Curt Schilling shared to his Facebook page on Tuesday, screengrabbed here for posterity but still live on the page as of 3:11 p.m. ET: 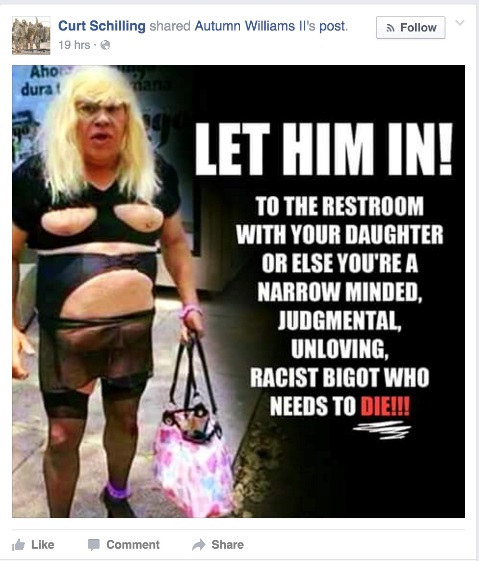 Schilling got suspended by ESPN in August for tweeting — then swiftly deleting — an image that vaguely compared Muslims to Nazis, then kept at it during his suspension. After sharing the above photo, Schilling expounded upon it in the comments:

Everyone is entitled to a opinion, and Curt Schilling has many of them. Ironically, Schilling was known for impeccable control during his pitching days.

North Carolina’s new law struck down an ordinance aimed to prohibit discrimination based on sexual and gender identity. Among other things, the law legally requires transgender people to use the bathrooms associated with the sex listed on their birth certificates.

According to a study by the American Institute of Suicide Prevention in August, 41% of transgender people attempt to kill themselves at some point in their lives, as opposed to 4.6% of the general public.”

Funny, that according to USA Today it’s the law, which states that biological males cannot use the bathrooms that were designed and built for biological females, that is “sweeping” and “controversial.” I kind of thought that the attempt to let sexually confused men, who are potential predators, into women’s restrooms with young girls, would be the controversial thing.

What’s not funny at all, is the strong implication/link that the author, Ted Berg, makes between Schilling’s conservative views and transgender suicide. I questioned Berg about this on Twitter, to which he replied that the “ostracism” and “insensitivity” were causes for the high suicide rate.

But if ostracism, insensitivity, and intolerance were primary factors in suicide, then why are middle-aged white males --by far-- the group most likely to commit suicide? Certainly, uber-privileged white guys wouldn’t be the leading candidates to off themselves if intolerance caused suicide, right? I mean, if that were true, then everything I learned at college about gender and the politics of race would be…well…wrong.

Seriously, though, people commit suicide for all kinds of reasons. Like, depression, drug abuse, mental illness, poverty, dysfunctional upbringings. All things that apply to transgendered people. And all things that many of them suffered from way, way before they ever knew what a Curt Schilling or a conservative ever was.

Conservatism doesn’t kill. Being forced to watch I Am Cait every week kills. (Violently clears throat.)