Peacock’s Newest Season of 'Rutherford Falls': White People 'Only...Act in Their Own Self-Interest’ 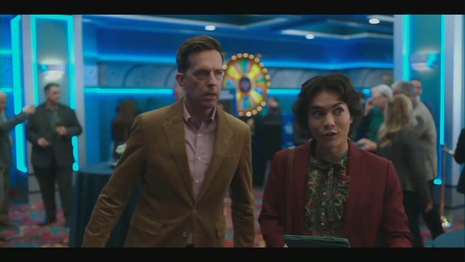 Season two of Peacock’s comedy Rutherford Falls released on June 16 and there was still plenty of hatred towards white people, unfortunately, albeit not quite as bad as season one. They attempted to excuse it this time with the “white fragility” argument, which is all too typical from the left.

Rutherford Falls centers around childhood pals Nathan Rutherford (Ed Helms) and Reagan Wells (Jana Schmieding). Nathan was a bumbling, tone-deaf caricature of a white man in season one. In season two, Nathan has realized his evil, white ways/sarcasm, and has been hiding in shame in the attic of his former history museum, which is now Reagan’s Minishonka Nation cultural center.

Nathan’s former non-binary assistant Bobbie, played by non-binary actor Jesse Leigh, accidentally discovers Nathan in the attic of the cultural center in episode 1, “White Man in the Cupboard” (Get it?), where the discussion on white fragility ensues:

Bobbie: WebMD says to apply this off and on for 15 minutes and tell me what the hell is going on.

Nathan: Okay, but it’s gonna take a while to really parse through all the nuances of my situation.

Nathan: That’s pretty much all the nuances.

Bobbie: But what have you been doing up here?

Reagan: It’s been a real journey for him, and for me via text.

Nathan: I’m almost ready to rejoin society. I just have to nail my reentry. People think I’m a selfish jerk, and they’re not wrong. I have to apologize to everyone and make sure they know I’ve grown and changed as a person.

In episode three, “Aunt Sue,” Nathan offers Reagan’s family advice on an inheritance issue. But his newly woke conscience kicks in and he sheepishly backtracks, telling them he has no business offering his opinion because he’s white, even though the issue affects all races.

The most racist scene happened in episode 5, “Adirondack S3,” as Reagan and quasi-villain Terry  (Michael Greyeyes) are asked to serve as indigenous consultants on a hit TV show called Adirondack. The show is meant to “skewer” real-life dramas like Yellowstone and Big Sky, according to ET.

Schmieding, who also serves as a writer for Rutherford Falls (the show has the largest staff of indigenous writers in television), told ET her goal with this episode was "making sure that it’s building awareness while being funny.” Greyeyes added that “it was the perfect revenge.”

Cox jokingly calls Reagan “The Gipper” and mentions his dad was Reagan’s ambassador to Austria, but Reagan disdainfully tells him her name is pronounced “REE-gan.” Terry realizes the producers are ignoring their advice, which leads him to bitterly utter a racist remark to Nathan and Bobbie:

Aiden: Nope. Popular mistake. We actually haven’t met. Alden Whitmer, producing co-AP. What can I do for you, buddy?

Terry: Alden, we expressed issues with the script that were not addressed.

Terry: Well, there’s still a ceremony scene and there shouldn’t be.

Alden: Right. I totally hear what you’re saying on that. That’s why we changed it to a sacred smoke ritual. That makes it less specific to the Minishonka.

Terry: Right, but you didn’t change any of the elements, and now you’ve also invented a fake indigenous custom.

Alden: Ooh, custom. Is that the fix, calling it a custom? These are great pitches, T.

Terry: I want you to cut it entirely.

Alden: Mm, okay, the thing is that this ceremony or custom or whatever you wanna call it, it makes our lead Remington realize what’s missing in his life. It’s like a major shift in his POV, yeah? And it’s gonna help later in the season justify the fact that Chief Nightpipe adopts him and makes him part of the tribe.

Alden: Hey, man, this thing shoots tomorrow. It’s TV. Sometimes you’ve gotta fudge things to make it work. I’m sure you get that, okay? But it sounds like after these tweaks, we’ve got a green light, alright?

Nathan: I mean, I couldn’t believe it. The just for old times’ sake argument didn’t work at all.

Bobbie: It’s almost like we can’t trust mass corporations to do the right thing.

Nathan: I wish Caitlin was still there. She would’ve rolled her eyes and said, “Ugh, what do you want now, Nathan?” But then after I bugged her long enough, she would’ve done what we wanted just to make me go away. I really miss her.

Terry: Well, the only thing you can count on white people to do is act in their own self-interest.

Terry decides to offer Adirondack bad advice, so the show becomes blatantly offensive with overdone stereotypes. This leads to a cameo appearance by Rep. Sharice Davids (D-Kan.) who reacts in a news story:

Reagan: God, Terry, what the hell? I leave you in charge and suddenly we’re in a John Wayne mushroom trip?

Terry: Isn’t it horrific? You were right, Reagan. They were never going to listen to us. So, my only choice was to make the show so glaringly offensive, no one would be able to ignore how stupid it is.

Terry: Amber, I think those dream catchers should have a lot more jewels on them. I wanna be blinded by turquoise. And the extras saging the teepees, I need louder whooping. Really whoop it up! Remember, you were born of the wolf.

Reagan: Don’t care. What about your plan to bring the production to Rutherford Falls?

Terry: Some things are more important than money. Not many things. Almost nothing. Some things.

Anchor: Controversial photos from the set of the hit TV show Adirondack were posted early this morning by NPR Correspondent Josh Carter who was alerted by unnamed sources close to the production. The popular series is now drawing ire from indigenous communities across the nation.

Davis: There’s no excuse this day and age for showing an absurdly offensive version of a native American ceremony where a sexy Pocahontas yells, “Woo woo,” on the back of a stuffed buffalo while smoking a sage bundle. It’s unacceptable.

Two other leftists, former President Barack Obama and Rep. Alexandria Ocasio-Cortez (D-N.Y.), were mentioned by name, and Bobbie referred to AOC and former co-host of The View Meghan McCain as “chaotic queens on both sides,” even though McCain is pretty much a RINO (Republican In Name Only).

Violent, far-left activist group Antifa got a couple of mentions beginning in episode 6, “Halloween,” when Terry’s son and his archrival’s daughter are caught vandalizing the town’s historic statue. The parents are angry until they see the word “colonizer” written on the statue, at which point they decide they’re “not mad":

Renee: This is actually kind of cute. Oh!

Feather: Emma Day! I can see you being a criminal.

Terry: Yes! Our suspicions were confirmed because we caught you…

Renee: I’m actually not mad at this.

Terry: If you’re gonna break the law, that’s something I can get behind.

Feather: Two hours with this pint-size Al Capone and already my sweet, baby angel is Antifa.

There was one thing the show got right. The writers recognized Nathan’s preborn child as a “baby” roughly 14 times, and they showed a sonogram image, as well. That’s a rarity in Hollywood and something to celebrate, especially as this was written in the aftermath of Roe v. Wade being overturned, a huge victory for life!

Conservatives Fight Back! This episode was sponsored by Dove, Ford Motor Company, and Volkswagen. Click each advertiser for their contact information so you can let them know how you feel about this season of Rutherford Falls.