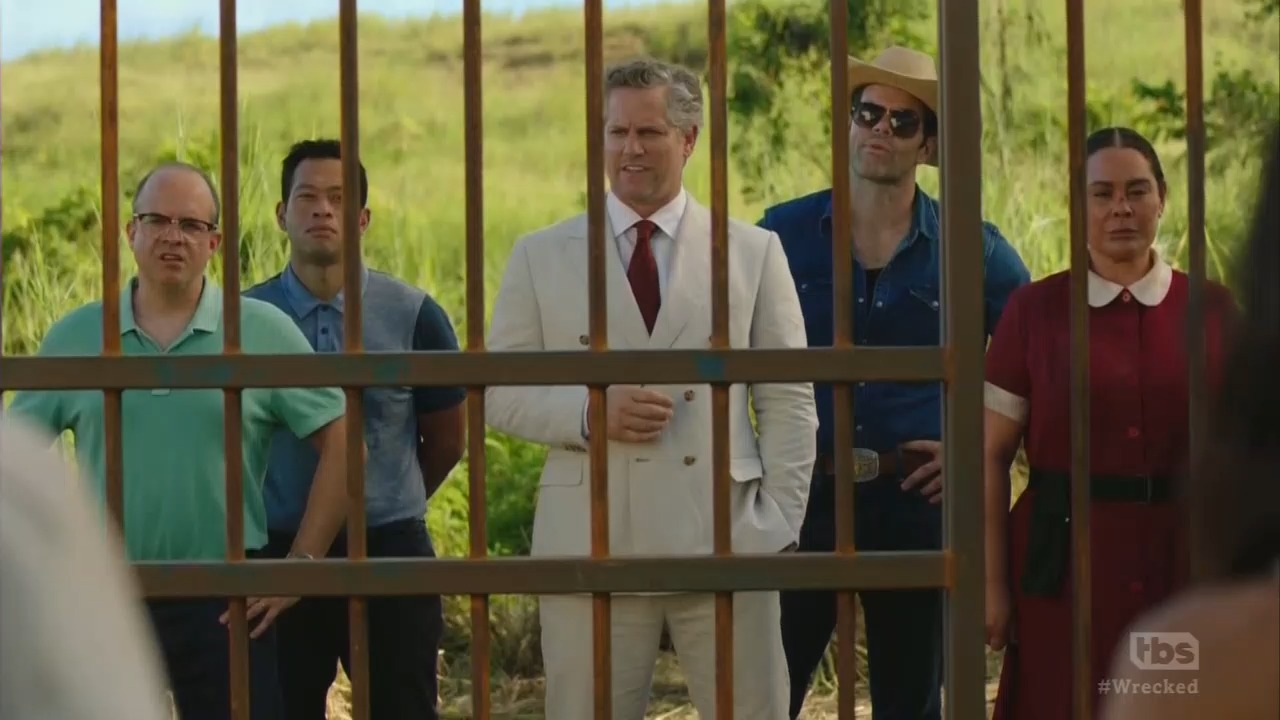 Whether it's the greedy corporate CEO poisoning people for profit or rich, white people hunting poor, black people for sport, Hollywood has a long history of portraying the rich - especially businessmen - as evil killers.

TBS's Wrecked continued the longstanding tradition, lampooning rich, white men on Tuesday’s episode, “Six Feet,” as “monsters,” misogynists and sexual harassers who look down disdainfully on the poor and treat them horribly. Oh, and they make people hunt and kill each other for sport, too. Because, of course.

Ironically, TBS founder Ted Turner is a wealthy, white male - but he’s also extremely liberal, so that probably gives him a pass.

The comedy Wrecked is about a group of survivors from an airplane crash that left them stranded on a deserted island. After battling pirates and a sinking cruise ship that was supposed to be their lifeboat home, the survivors find themselves on yet another island inhabited by wealthy men who bring captives onto the island to hunt and kill each other for sport.

When one of the survivors implores, “Who would do this?” fellow survivor Daniel/Danny (Brian Sacca), who comes from a wealthy and ruthless family, including a sister who killed their villainous father to keep ransom money for herself that was supposed to go to the pirates for the survivors’ release, answers bitterly, “The rich. That's who. Make no mistake, rich people are monsters.”

We then get a glimpse of the wealthy men who are heading up the hunt having a barbecue and grilling “ape steak.”

Declan: Who wants gorilla with their eggs? Brewster, ape steak?

Brewster: Uh, does a fat dog fart when you squeeze it? 'Course I'm havin' ape steak, man. Come on!

Declan: Errol, how about you?

Errol: No, I'm still vegan, just like last year and the year before that.

Peabody: Well, I'm sure Martha can find something green for you to stuff in your pussy.

Errol: It's the exact same joke he said last year.

Declan: Gentlemen, I would like to thank you for clearing space in your busy schedules to come along to this impromptu hunt.

Declan: No, Peabody, I have not. A few weeks ago, a pirate contacted me about some cargo she had come across -- the survivors of an airline crash. I was ready to bring them here. I told her I wanted their organs. I left out the little bit about the hunting, of course. But then she went dark. I had almost given up on the endeavor until two days ago when eight of them just washed up on my shore.

Peabody: Are you serious?

Errol: What are the odds?

Declan: I think this is going to be our best hunt yet.

Brewster: Man, I am so pumped to watch people hunt each other. Being rich is awesome. This is awesome!

Later, when the survivors-turned-captives are lined up in uniform as prey to be named, the captors display more misogyny towards Karen (Brooke Dillman) until one of the men recognizes Daniel as “one of their own.”

Declan: I think we have our "Six Feet."

Peabody: "Six feet" as in six feet under. You'll be the first to die in the hunt.

Karen: Based on what criteria?

Peabody: Uh, you're old as shit. And you're a woman.

Brewster: Look at him eating it off the floor like a dog. Hey, can you bark like a dog, Half Pint?

Peabody: Holy shit! I was sitting there like, "I know this guy." It was the beard or something. Wow! I'm Greg Peabody. I used to work with your father. We both got sued for harassment by that same fat, dumb lady.

Peabody: Yeah! Declan, we don't hunt our own. Get this bracelet off of him. He's one of us.

Daniel agrees to go with the men so he can work undercover to save the other seven survivors. Declan (Jonno Roberts) isn’t quite convinced that Daniel is truly “one of them,” and he begins to grill him.

“If you're so wealthy,” Declan asks, “why were you flying commercial? Surely you could've flown private. Unless, of course, you don't care about appearances.” At first, Danny becomes nervous and starts to stutter, but he quickly recovers, playing up the role of a wealthy business owner as liberals typically view them - heartless, cold and cruel.

Of course, the other men eagerly listen and ask for details, drooling over each callous answer like a pack of rabid, ravenous dogs.

Daniel: Actually, I was thinking of acquiring Lotus Airlines. Call me old-fashioned, but I like to taste the milk before I buy the cow.

Brewster: They can kiss that deal goodbye.

Daniel: No, I'm still going to acquire them. So, I can bankrupt them. You try to kill me, I destroy you.

Errol: Well, how would you do it?

Daniel: I would personally fire each and every one of them.

Daniel: Face-to-face. The VPs, the pilots, the lowly baggage handlers.

Errol: Oh, that guy was just doing his job.

Daniel: I don't care. I'm gonna put them all on the streets!

Declan: But they'll take you to court. The legal fees alone…

Daniel: I don't care. I will do whatever it takes to show them that I am a man! A rich and powerful man that won't be stepped on!

Peabody: Yeah! I'm sick of being stepped on! All these harassment lawsuits?! They're bullshit!

Brewster: It's a slap on the dick is what it is!

Errol: Yeah, right in the dick!

Daniel: Yeah! We are men with money!

Daniel: We do what we want!

There are more insults, liberalspeak and stereotypes thrown in for good measure through the rest of the show. Karen remarks, “You know, not enough rich people take the time to invest in green energy.” And while the wealthy men are shooting glassware like skeet, Brewster remarks to Daniel, “And she's all like, ‘I'm LGBT, whatever.' And I said, ‘Lady, the only letters I care about are B-L-T, so you make me a damn sandwich.”

In the end, Daniel points his gun at Declan to save himself and his friends, and when Declan points his gun back at Daniel, Daniel yells, “Not so fast, you rich piece of shit. Unless you want a bullet in your top 1%.” But Declan had earlier removed the bullets from Daniel’s gun because, “I never believed you were one of us,” and all eight captives end up back in their makeshift prison cell.

Isn’t it a bit ironic that liberals have such disdain for the rich in this country, when Ted Turner and other Hollywood elitists are so wealthy themselves? Is it self-loathing? Hypocrisy? A little bit of both? We may never know the answer, but what we do know is that the “American dream” is to become successful and wealthy and anyone who has been able to achieve that dream should be applauded, not ridiculed and made into comedic caricatures for cable television.