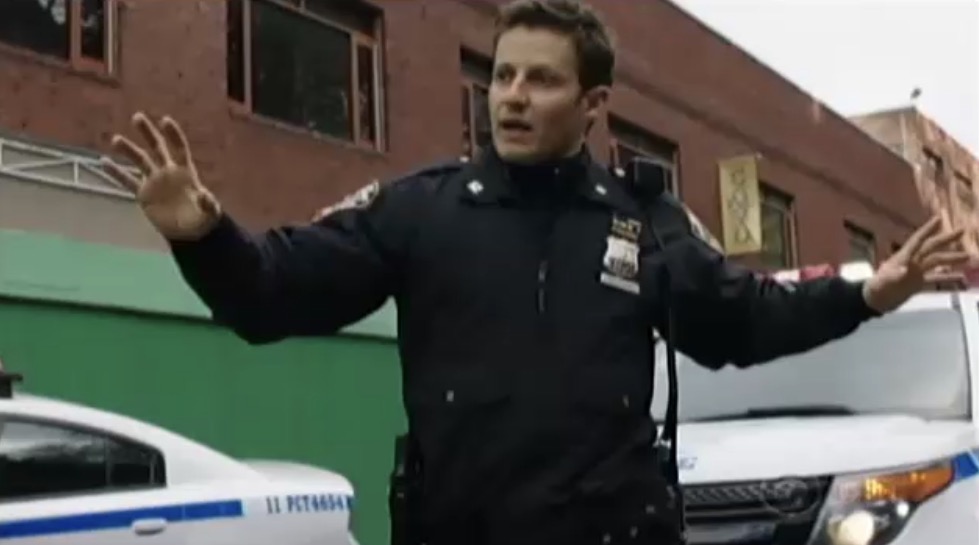 CBS’s cop drama Blue Bloods once again did a masterful job of defending the honor and sacrifice of hardworking police officers while addressing the controversial topic of race relations and the hostile, thankless environment today’s officers must work in.

Blue Bloods revolves around the Reagans, a multi-generational family of police officers headed by New York Police Commissioner Frank Reagan (Tom Selleck). In Friday's episode, "The Brave," Frank’s son Jamie Reagan (Will Estes) and his partner Eddie Janko (Vanessa Ray) respond to a call regarding “an unauthorized male, white, operating an NYPD RMP.” When they arrive on the scene, they realize it’s Billy, a developmentally disabled man they know in the neighborhood, who has stolen the cop car. Billy is extremely confused and upset as a swarm of officers have him surrounded with guns drawn.

Jamie tries to explain to the officer in charge about Billy's condition and that he wouldn’t hurt anybody, but the officer continues to follow protocol and orders Jamie back to his car. Jamie continues to beg the officers to lower their weapons and allow him to speak to Billy, but the captain refuses, leading Jamie to make a split decision to put his life on the line and break protocol to help Billy by approaching the car.

Jamie: Okay, can I come talk to you, Billy?

Billy: Having understood them, do you still wish to speak to me?

Jamie: I do wish to speak to you, Billy. I do. Because we got a situation here.

Billy: We got a situation here.

Jamie: Yeah, you see these other officers? They're a little scared, all right? So, I need you to help me show them that everything is okay. Can you do that?

Jamie: Okay, Billy, but right now, I'm the officer that needs assistance, okay? So, can you help me out?

Jamie: Can you do that?

Jamie: Okay. All right, I'm gonna open the door, and we're gonna walk back to my car. Hands behind your head, all right? Okay?

Jamie: Hands on your head.

Billy: Hands on my head.

Jamie: Okay? Right? Okay, Billy. Okay, I'm gonna... You know what? Can we show these guys? How we cuff people, Billy?

Jamie: All right, let's do it. Okay, hands behind your back. This is how we do it. Right?

Billy: Okay. You're a good cop.

At a time when the only scenes on the news we see of officers are negative ones, it put a tear in my eye to see the risks that these heroes take to serve and protect us portrayed in such a beautiful, compassionate manner. The type of scenes that unfortunately rarely make the ten o’clock news, but ones that do indeed happen every day. Jamie and Eddie end up being temporarily suspended and facing charges for insubordination, but both are happy with the decision they made to step in and help Billy.

Of course, no episode of Blue Bloods would be complete without the Reagan’s weekly family dinner, and the topic of conversation this time is about Frank's granddaughter Nicky wanting to be an officer as well as what the family loves about police work. Among the family’s answers: “rescuing a kid from danger,” “getting a rapist off the streets,” “saving people’s lives,” and “slapping the cuffs on a murderer.”

Nicky says that she likes the idea of helping people, which leads her mom, Erin (Bridget Moynahan), to speak up about the riskier aspects of the job. She is the state’s Assistant District Attorney and has strong misgivings about Nicky becoming an officer. She believes the family is “sugarcoating” the job to Nicky and it becomes obvious that the loss of her brother Joe in the line of duty weighs heavily on her.

Meanwhile, Frank meets with a group of young Explorers. He asks the students how many of them want to be police officers. No one responds until one girl, Sophia, finally raises her hand and announces, “I want to be the first black, female police commissioner. But not ‘cause I like cops or anything like that. ‘Cause I want to change the system. I want to change everything about it.”

Frank decides it's time to ramp up the Explorer curriculum. This time he brings in Jamie and Eddie to share their stories with the students about what it’s like to be a police officer. They bring up their experience with Billy and their words have a profound effect on the group, including Sophia:

Jamie: We're just a couple of regular POs here to talk to you today. And we know you've met a lot of bosses in suits and brass in uniforms and a lot of bars and stripes. Well, that's not us.

Jamie: And the odds are, if you're lucky enough to join this department, you'll be one of us.

Janko: And that story we told you about Billy, cops do that. Regular cops.

Jamie: And sometimes, cops have to make a judgment call that gets them jammed up with the brass and the bosses.

Janko: Like us. Reason we're here, we pulled a suspension for insubordination.

Jamie: Which happened while we were trying to help out Billy.

Janko: Which was the right thing to do.

Jamie: And the risky thing, as it turns out. We made a judgment call.

Janko: We'd do it again.

Jamie: Risk isn't always about facing down a gun, sometimes it's about helping someone in trouble so they don't end up in more trouble.

Janko: That's a risk worth taking.

Sophia: Because you saved Billy's life.

Jamie: But maybe. And at the end of the day, that's as good a reason as any for becoming a cop. Yeah.

Gormley: Okay, kids, it's time to move on. But no worries, I'm gonna schedule Officer Reagan and Janko to come back and talk to you again. But now that you heard the real deal from our uniformed officers, how many of you are thinking about becoming cops? [Several raise hand, including Sophia.] Wow. That's fantastic.

At a time when anti-police hostility is at an all-time high, and officers are being targeted and killed because of it, messages like this are so very important. Maybe it will lead the next generation to consider becoming police officers, but at the very least, I hope it will help to change the current hostile climate into one of gratitude for all that officers do to serve and protect us.