CBS's 'Wisdom of the Crowd:' Trump Is 'Head Cheeto,' Conservatives Are Stupid 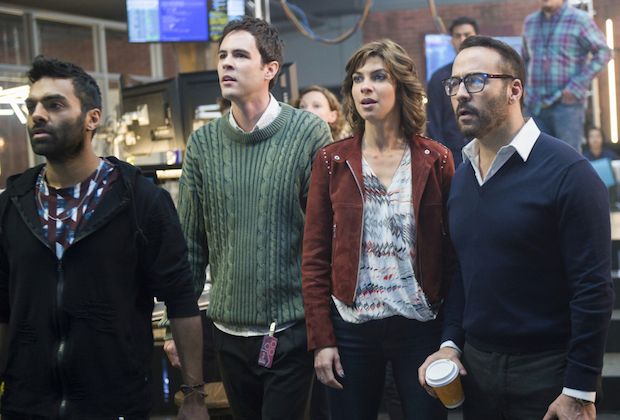 CBS’s Wisdom of the Crowd has already built up an anti-conservative reputation despite only being five episodes in, so it should come as no surprise that the sixth episode, “Trade Secrets,” that aired Sunday, November 12, took more shots at the right.

The show centers around a crowd-sourced crime fighting platform called “Sophe,” created by Silicon Valley tech innovator Jeffrey Tanner (Jeremy Piven) in an attempt to find who murdered his daughter. In the process, he ends up helping to solve other crimes with the public’s help, via their input on Sophe.

In Sunday’s episode, Sophe users happen to catch a murder as its unfolding and they send the information, along with a photo of the suspect, to the system. As it turns out, the white male in the photo is Jackson Foley, a man connected to a group of “some anti-government wackos” as Detective Tommy Cavanaugh (Richard T. Jones) describes them.

It’s not long before U.S. Deputy Marshal Dino Hutton (Mark Valley) visits Sophe’s headquarters to announce that Foley wasn’t the perpetrator in the recent murder; he was actually the intended target. And Sophe employee Tariq (Jake Matthews), who is Muslim, doesn’t take kindly to finding out that Foley is under the Federal Witness Protection Program, remarking, “Wait, so you’re protecting a terrorist? Gosh, imagine what would happen if he looked like me.”

Hutton wants Sophe shut down immediately, telling everyone that Foley did not blow up the federal building - he actually “rolled over on the guys who did.” And that the recent murder happened because “his old Sovereign Destiny confederates (are) trying to get even with him for turning them in.”

As employees start discussing the benefits of Sophe, Hutton becomes more frustrated and tries to get them to understand the importance of shutting the system down immediately:

Josh: He doesn't get it. That's the problem.

Josh: It's an actual function. No, it's not gonna do them any…

Hutton: Okay, so, what part of this do you guys not understand? The people that want Foley dead, they're not a bunch of shotgun-toting deplorables. They're more than capable of using this site to figure out exactly where he is.

Well, we all know who “shotgun-toting deplorables” refers to (thanks, Hillary). And despite the hidden meaning in those last two sentences (that conservatives who own guns and/or voted for Trump would be too unintelligent to know how to use a system such as Sophe), we can clearly decipher the insult. Should we mention the fact that the show's star, Piven, has now been accused of sexual assault by three women? Kind of takes away from their moral high-ground and ability to judge anyone as "deplorable."

After Hutton asks to speak to Tanner privately, the two butt heads over whether Sophe should be shut down, and a not-so-subtle jab at President Trump is taken:

Hutton: Do you have any idea the colossal amount of crap that you've stirred up? You can't just blow the cover of someone in the program.

Tanner: I think we both can agree he was already compromised.

Hutton: I get it. This is your pet project. You want to solve your daughter's murder. But do you even care about the amount of damage you're causing?

Tanner: Thank you. Yes, I care. I care a lot. But I'm not gonna take Sophe down just because you lost control of your snitch.

Hutton: Okay, listen, we have protocols. Sure, Foley should have called us to arrange a pickup, but you got the picture out so fast, he probably got spooked.

Tanner: Well, what's preventing him from picking up a phone right now?

Hutton: I don't know. Maybe the city full of vigilantes that you've empowered to hunt him down. I swear to God, if you get him killed, the federal government's gonna come down on your head so fast...

Tanner: I'll tell you what. Why don't you bring the head Cheeto down right now? All right? Let's do it.

In the end, Hutton ended up being part of the Sovereign Destiny group and was planning on killing Foley after he was found, but he wasn’t successful. Let’s hope, for the sake of conservative viewers, that Wisdom of the Crowd meets that intended fate.