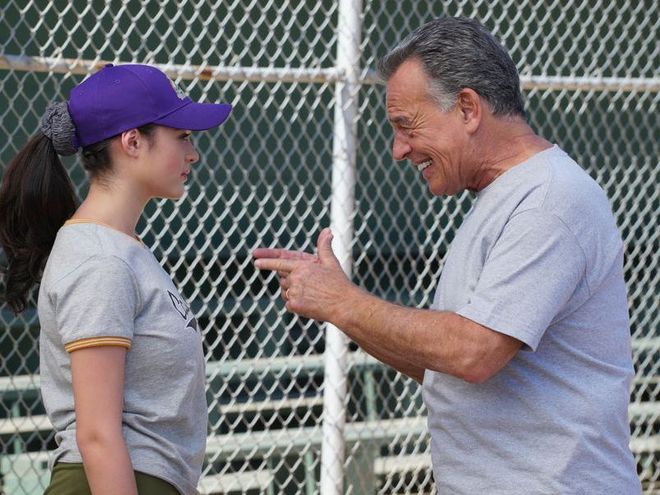 Much to the joy of the Gay & Lesbian Alliance Against Defamation (GLAAD), ABC’s Fresh Off the Boat had one of its teenage characters officially “come out” as a lesbian on the Wednesday, November 7 episode, “A League of Her Own.”

As main characters Jessica (Constance Wu) and neighbor Honey (Chelsey Crisp) are having a drink at lesbian bar Denim Turtle, Honey’s teenage stepdaughter Nicole (Luna Blaise) walks in and is shocked to see Jessica and her stepmother there:

Honey: Nicole? What are you doing here?

Jessica: Honey, I saw a Lifetime movie about this. You've got to put her in rehab before she stabs you and your husband to get the key to the liquor cabinet!

Nicole: Okay, I didn't come here to drink. I heard the Denim Turtle has a softball team and I wanted to sign up.

Honey: How do you even know about this place?

Nicole: I need to talk to you.

Bartender: Kristen, get that bottle of champagne. Barb, get that cot ready in the back. We've got to be prepared for this to go either way. Bev, you set?

Nicole: Um, I've been wanting to tell you this for a while, but I could never find the right time. But maybe there's never a right time. So... I'm gay.

The show is set in the '90s, so the entire setting of openly gay supporting characters and unquestioning support comes off a bit anachronistic. It also airs at 8:30 pm, a prime timeslot for family viewing.

After Nicole comes out to her stepmother Honey in the lesbian bar, she struggles the rest of the episode to come out to her father. Everyone is supportive and celebratory of her announcement, including her father in the end who hugs her and tells her that an anti-gay joke he made earlier “in no way reflects [his] values.”

Not one person shows concern or presents a Biblical point-of-view regarding homosexuality. Not one person explains that teenage hormones can cause confusion and that most teenagers are unable to decide who or what they’ll be or become while their brains are still rapidly developing. Everyone in the end is happy and celebratory over the news.

Because, of course. This is Hollywood’s biased point-of-view after all.