Hollywood is one of the greatest cesspools of hypocrisy in America. So of course, hypocrites gonna …, well, you know.

On October 25, Jane Fonda and Gloria Steinem were guests on All In With Chris Hayes on MSNBC to discuss sexual predator Harvey Weinstein, as well as their own foundation, the Women’s Media Center. But the two geriatric feminists couldn’t resist enforcing the race narrative and slamming conservatives and President Donald Trump in the same breath. 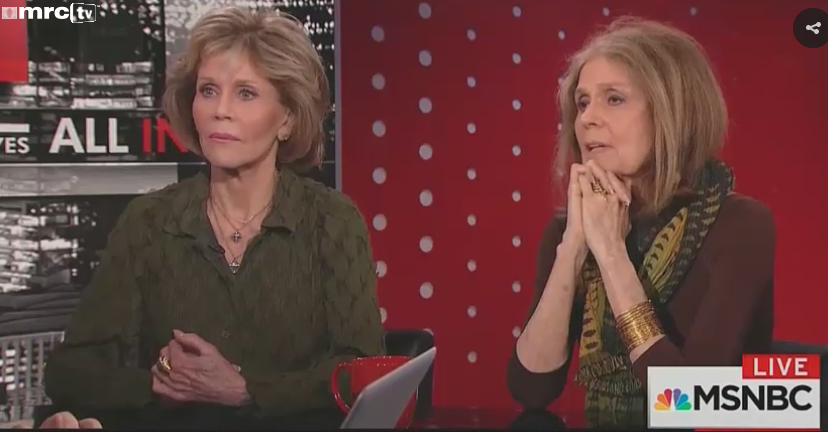 Fonda, who recently let it be known she “isn’t proud of America,” told Hayes that she thinks that the Weinstein scandal was so big because the victims were both “famous and white.” The actress also labeled the conservatives’ condemnations of liberal Hollywood activists (since they ignored Weinstein and others like him for so long) “one of the most ridiculous arguments I’ve ever heard!”

Gloria Steinem, journalist and lefty activist, decided to make her argument about Trump, describing watching the media as like “watching a traffic accident.”

In the beginning of the segment, Hayes asked Fonda, in reference to the Weinstein scandal, “What do you make of this moment?” Fonda decided to immediately make it about race, replying, “It’s too bad that its probably because so many of the women that were assaulted by Harvey Weinstein are famous and white, and you know, everybody knows them. This has been going on a long time. To black women and other women of color it doesn’t get out quite the same.”

Was she scoring “intersectionality” points by dragging race into the conversation, or has it just become a leftist verbal tick?

When Hayes brought up the argument that conservatives were justified in being annoyed with liberal Hollywood activism, in light of all of Hollywood’s sex scandals, Fonda was outraged. “I think it’s the most ridiculous argument I’ve ever heard,” she told Hayes. Steinem used Hayes’ comment as a platform to launch into a tirade against Trump, saying that, “That we have a president that profiteered off of the beauty contest is absurd in itself, in addition to the fact that he’s a self-confessed harasser.”

Even though Hollywood has a severe issue with ignoring rape and assault and celebrating the perpetrators, in the eyes of radical feminists, it’s wrong to criticize their greatest allies:

HAYES: "But specifically in Hollywood, you know, there’s this...conservatives have really run with the Harvey Weinstein thing. And at some level I understand, right? Because their argument is basically like, you Hollywood liberals lecture us sanctimoniously and here you’ve got this thing happening in your own backyard. What do you think of that?

FONDA: I think it’s the most ridiculous argument I ever heard! I mean,

FONDA: Right. It’s just easier for those kind of predatory men, like the president, to have access to the kind of women that he likes when he’s in the model business.  One of them runs Miss Universe, Harvey happens to produce the runway project. That’s not an accident.

HAYES: Puts you in proximity.

STEINEM: That we have a president that profiteered off of the beauty contest is absurd in itself, in addition to the fact that he’s a self-confessed harasser."